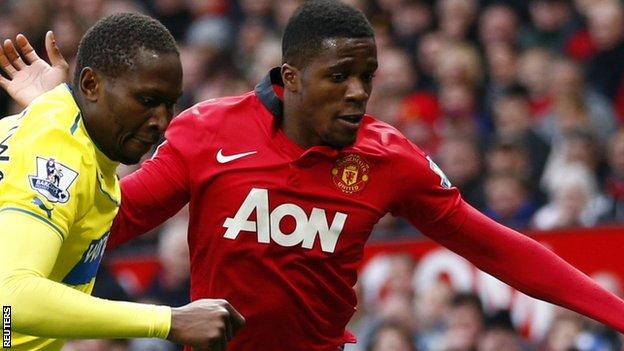 Cardiff City are hopeful of signing Manchester United winger Wilfried Zaha on loan until the end of the season.

Negotiations between the clubs are ongoing, with the Welsh side waiting on United to fully approve the move.

Cardiff wanted to complete the transfer of Zaha, 21, before Saturday's FA Cup tie at Bolton and it was understood the player had started his medical.

However, Cardiff boss Ole Gunnar Solskjaer said on Friday the player had not had a medical at the club.

Zaha joined United from Crystal Palace for ÂŁ15m in January 2013, but stayed at Selhurst Park on loan until the summer.

Since his move to Old Trafford, Zaha, who was signed when Sir Alex Ferguson was United's manager, has started just two games, the Community Shield victory over Wigan and the League Cup fourth-round win against Norwich.

The England international's only appearances under David Moyes this season came as a substitute in the Premier League meetings with Newcastle and Aston Villa in December.

A lack of first-team opportunities at United contrasts his time at Crystal Palace last season, where he scored eight times in 50 appearances.

Other Premier League clubs have reportedly been interested in a move for the winger, who won the decisive penalty for Palace in last season's Championship play-off final on his way to being voted man of the match.

If the move goes through, Zaha will become Cardiff's third signing of the January transfer window following the arrivals of Norwegian pair Magnus Wolff Eikrem and Mats Moller Daehli.

Ole Gunnar Solskjaer's side are currently bottom of the Premier League with 18 points from 22 games.