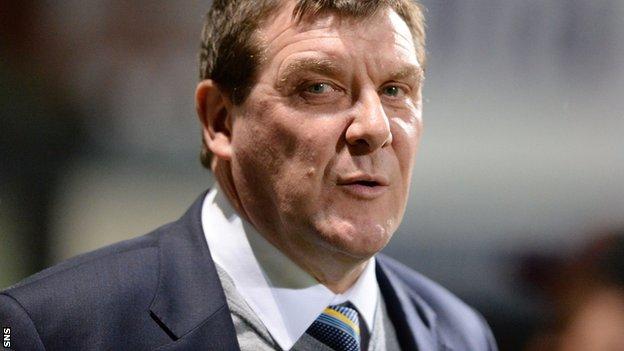 Saints budgeted for a new striker this month, but means those funds will be split between a forward and a midfielder.

And the new striker could arrive by the weekend.

However, Wright has ruled out a move for , who spent the first half of the season on loan at Dundee United.

"I met with David and he had indicated that, if he was coming to Scotland, he would like to come to St Johnstone," Wright told BBC Radio Scotland's Sportsound.

"But he doesn't control the situation, Blackburn do and they want him to go to [an English club]."

When pressed on which striker he would be signing, the Saints boss said: "I'll give you a clue, he's Scottish."

Wright, who also ruled out a move for , repeated his view that 20-goal top scorer Stevie May, 22, will most likely see out the season with St Johnstone.

"There'll be a valuation on the player and, if that's met, the club will sell him," said Wright.

"He wants to stay this season, he wants to play a full season. He wants to score goals and do well for St Johnstone.

"Unless it's an unbelievable offer, I think he'll still be at St Johnstone until the end of the season."

But Wright added there were "contingency plans" if May were to leave this month.

Should Saints complete their two proposed signings, forward Chris Kane's loan at Dumbarton is likely to be extended.

"If he comes off my bench five, six times between now and the end of the season and gets 50 minutes then I might have a question mark over whether he can start for me next season," explained Wright.

"But, if he goes to Dumbarton, plays between now and the end of the season, bangs in goals and gets experience then I know I'll have a player that'll be ready to play for me at the start of next season."