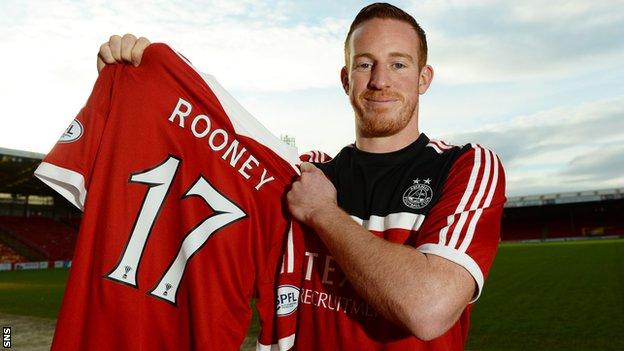 The 25-year-old Irishman, who starred for Inverness, has signed for the Dons after his release by League One outfit Oldham Athletic.

"At Inverness I got a lot of goals but that was probably about all I did. I feel I've developed," he said.

"Everyone develops over time and I feel I've added stuff to my game; my hold-up play has come on."

The Dons were vying with Premiership rivals Hibs for the striker who scored 47 goals in his final two seasons in the Highlands.

"I had some great experiences in England in the Europa League and played against Chelsea, Man City and Liverpool," said Rooney after agreeing a two-and-a-half-year deal at Pittodrie.

"I had come close to working with Derek McInnes a couple of times in the past and it was something I wanted to do.

"You have to weigh up all your options but I was very impressed with what the manager had to say, the way he went about things and his plans for the future.

"I know a couple of the lads here; Jonny Hayes and Willo Flood, who've said great things about the club."

McInnes described Rooney as "a proven goalscorer" who would improve his side's attacking potential.

"There were other clubs keen to take him and it's great that he wants to be part of what we're doing here at Aberdeen," said the Dons boss.

"I've said all along that I'll only bring in players who I believe will add something to the squad and Adam certainly ticks that box."

Aberdeen had been interested in Blackburn Rovers forward David Goodwillie, who was on loan at first club Dundee United for the first half of the season.

However, a combination of wages and the fact Goodwillie is cup-tied from both the League Cup and Scottish Cup, having played for United earlier in both competitions, set the club's sights elsewhere.

McInnes, who had already during the January transfer window, adds Rooney to his squad Saturday's league trip to face Motherwell.

Rooney made only 17 starts in two years for Birmingham after leaving Caley Thistle in 2011 and spent last season on loan at Swindon Town, scoring 10 goals in 33 appearances, before in August.

He has scored seven goals in 33 appearances - a third of them from the substitutes' bench - for the Latics this season.

Oldham stated on their website: "The striker had 18 months left on his contract at Boundary Park, but the mutual agreement allows him a return to Scotland with Aberdeen.

"The 25-year-old had also been a target for his former Inverness boss, Terry Butcher, now at Hibernian, but the Easter Road outfit weren't able to fund a move."