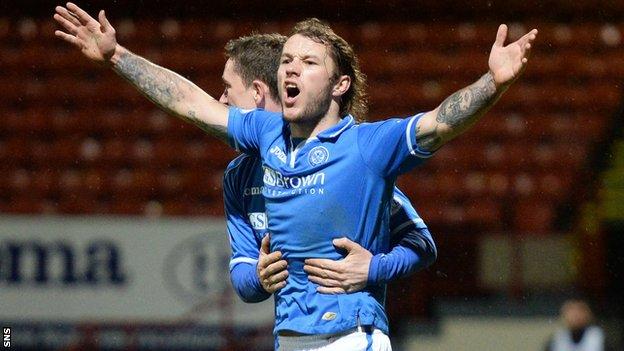 Stevie May for Scotland? I heard that suggestion being kicked around a couple of months ago and thought it sounded ridiculous. Now I'm not so sure.

This week, I watched from the commentary box as the St Johnstone striker rattled in his 20th goal of an amazing season. And there are still four net-finding months to go before the campaign is over.

Opposing Scottish Premiership defenders will hope the Perth team get an offer they can't refuse and the 21-year-old May takes his goalscoring prowess elsewhere.

Saints fans don't see it that way. Nor do those of us who want to enjoy seeing our talented youngsters playing in Scotland for as long as possible.

It's only a matter of time, of course, before May leaves McDiarmid Park, where the crowds have been swollen by squads of scouts in the directors box casting envious eyes on St Johnstone's prize asset.

The Newburgh lad's progress since the summer has been staggering. You have to remind yourself that this is May's first full season of top-flight football.

He scored in his opening game of the campaign, in front of a near-8,000 crowd in Perth, to knock the then Norwegian league leaders Rosenborg out of Europe.

And there haven't been too many matches since in which May hasn't hit the net. Manager Tommy Wright set him a pre-season target of 20 goals, hardly expecting he'd reach it just a few weeks into the New Year.

And yet there was a time - and you don't have to go back too far - when St Johnstone didn't seem too sure what to do with young May.

He'd scored his first goal for the top team as a 16-year-old when Derek McInnes was manager, but it was while Steve Lomas was in charge that May's future at the club appeared unclear.

Two seasons ago, he was struggling to get involved in the first team and, in December, was loaned out to Third Division Alloa Athletic. After 19 goals in 22 games for Paul Hartley's team, May returned to Perth.

But not for long as he soon embarked on another loan spell, this time for the whole season in what was then the First Division with Hamilton Academical. Again he made his mark. A total of 26 goals this time.

Whether by accident or design, those loan spells have been the making of May. The chance to play regular first-team football and well away from the relative glamour of the top league.

Talk to anyone at Alloa or Accies about May and you hear the same thing. He was quiet and focused. And his work ethic meant he was the last player to leave the training ground.

This season, he's been given his chance at Premiership level and many football watchers have been blown away by his performances.

When he blasted through the 20-goal barrier at Firhill, it wasn't just his finishing - tucking away his only real chance of the game - that was impressive.

It was his all-round performance that underlined how much May's developed as a player. He was constantly on the move to stretch the Partick Thistle defence, made quick, intelligent runs into the channels and showed a great touch to hold on to the ball when he got it.

He's built himself up physically over the last couple of years and even the strongest of defenders struggle to shift him off the ball.

What seems like a tall order, asking a pretty inexperienced player to operate as a lone striker, doesn't present much of a challenge to May.

Which makes you start to wonder - well it makes me wonder anyway - if he could do a job for Scotland. And I think he's quickly getting towards a level of performance where Gordon Strachan must be thinking about adding May to his squad.

We're not awash with great strikers, especially ones who can do a solo shift up front. He's already an under-21 international and May may be ready to add another achievement to an already special season.