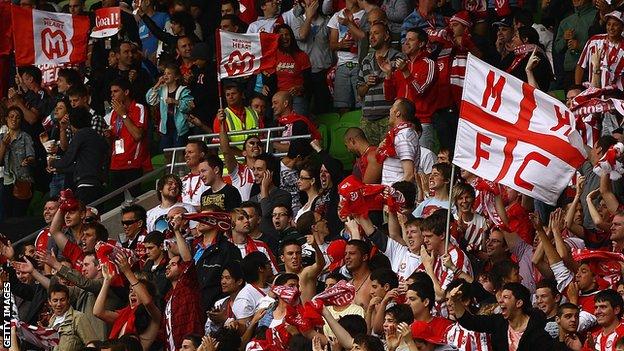 A consortium led by Manchester City have taken over Australian side Melbourne Heart.

City's chief executive Ferran Soriano said: "We are excited about the opportunity to make Melbourne Heart one of the most successful football clubs in Australia and throughout the region.

"We believe the strong sports culture of Melbourne, combined with the football and commercial expertise within our consortium, will make for a powerful combination both on and off the pitch."

The consortium which has bought Heart - who are currently bottom of the 10-team A-League table - sees the group which owns rugby league's Melbourne Storm take a 20% stake in the club.

Who are Melbourne Heart?

Bart Campbell, chairman of both the Heart Consortium Group holding company and Melbourne Storm, said: "Partnering with City to co-invest in Melbourne Heart will further strengthen the sporting landscape in one of the world's greatest cities and bring a range of new capabilities to AAMI Park.

"We are excited to be a part of this unique project. It is our shared ambition to replicate the model that City created with the New York Yankees around New York City FC and for both organisations to benefit as a result."

Melbourne Heart chairman Peter Sidwell said: "The board feels that with the successful establishment and evolution of the club over the last four years, Melbourne Heart now stands on sound commercial and financial foundations."

David Gallop, chief executive of the Football Federation of Australia, said the deal represented a huge vote of confidence in the future of the A-League.

"Football has moved into the mainstream of Australian sport and is ideally placed to benefit from the boom in football across Asia," he said.

"Manchester City and their Australian partners have made a strategic investment and I welcome them to our growing competition. It's another sign that the world is taking notice of Australian football."