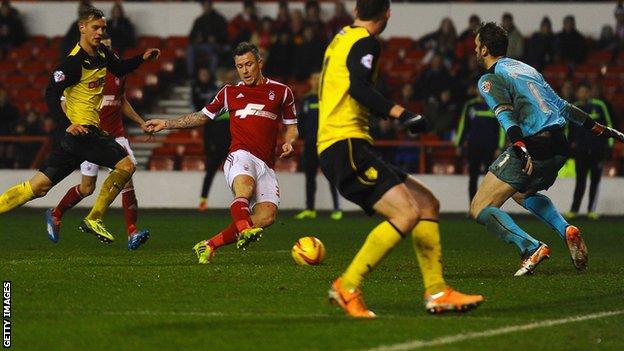 But Cox converted from six yards to spark a fightback, before Henderson headed level against his old club.

Andy Reid delivered for Mackie to head home, before Cox struck again as Forest consolidated fifth place in the table.

Impact from the bench

Jamie Mackie had been on the field for 83 seconds when he scored Forest's third goal, his first in 12 matches

Billy Davies's side have now gone 12 games unbeaten, while Watford, who suffered back-to-back defeats for the first time since November, remain 16th.

Giuseppe Sannino's Watford raced into a shock two-goal lead at Manchester City in the FA Cup on Saturday and repeated the feat against the Championship promotion hopefuls.

Troy Deeney went close for the Hornets and Danny Collins had smashed a header against the bar for the home side before Angella, a defender, finished like an accomplished centre forward.

The 24-year-old audaciously flicked Ikechi Anya's corner goalwards with the outside of his boot and the accuracy of the effort proved too much for Gonzalo Jara, who could not clear the ball off the goal-line.

Davies responded by introducing Cox for Greg Halford during the interval and Forest rallied as the outstanding Andy Reid drew a parried save from Manuel Almunia.

The former Arsenal goalkeeper again thwarted Reid on 58 minutes after Angella doubled the visitors' advantage with help from some charitable defending.

His unmarked run afforded him space to plant a header past Karl Darlow from Sean Murray's inswinging free-kick.

Cristian Battocchio tested Darlow as Watford rallied, but Mackie, on the field for just 83 seconds, planted a header low past Almunia after Reid had again delivered with accuracy.