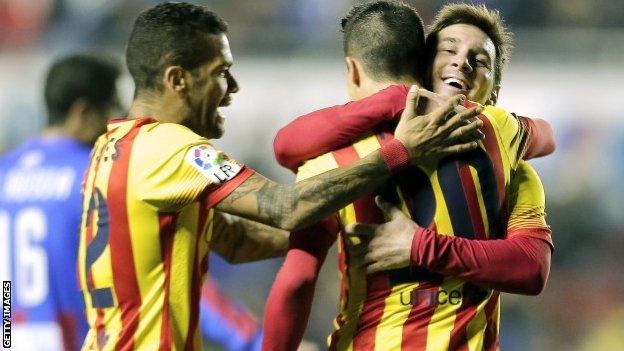 Cristian Tello scored a hat-trick as Barcelona came from behind to defeat Levante 4-1 in their Copa del Rey quarter-final first leg.

Nabil El Zhar gave the home side the lead before Barca equalised after the break thanks to a Juanfran own goal.

Lionel Messi, on his 400th appearance for the Catalan giants, then helped set up all three of Tello's goals.

"It's spectacular to have a player like Messi on your side," said Tello. "All four goals came from his boots."

Barcelona coach Gerardo Martino, who made eight changes to the side that drew at Levante on Sunday, added "When Messi plays like he did in the second half he was able to open up this game and could open up any other."

Spanish forward Tello, 22, fired in his first after racing on to Messi's through-ball before again combining with the Argentina forward to make it 3-1.

Five minutes from time he completed his hat-trick with a volley from yet another Messi pass.