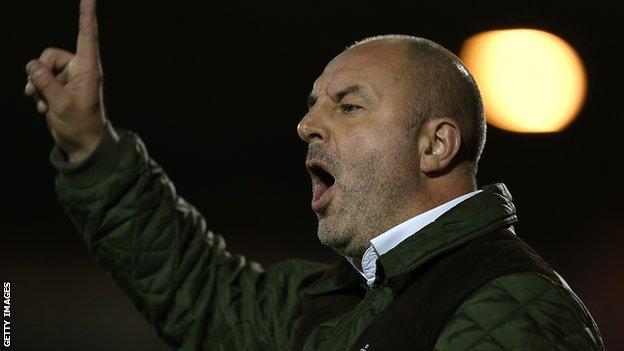 Rochdale manager Keith Hill believes his side are capable of pulling off more shocks in this season's FA Cup.

The League Two club progressed into the fourth round for the first time in 11 years after beating Leeds, and now host Sheffield Wednesday on Saturday.

"The FA Cup is special, it is magic. We know we have to be at our very best," Hill told BBC Radio Manchester.

"We will do everything to represent the fans. It might just be our season in the competition."

Having entered at the first-round stage, Rochdale have defeated Torquay, Rotherham and Leeds to set up a clash with another Championship side.

I like working with honest players who want to improve and want to play the way I expect the game to be played, with hard work and endeavour

Hill feels the side will need a repeat performance from the previous round to progress.

"If we set ourselves up correctly, we have a chance," said the 44-year-old. "I believe the players will be encouraged by beating Leeds and the performances we have had before and after that game.

"It is an opportunity for us and we are looking forward to it. The players deserve the opportunity to represent Rochdale Football Club.

"It has been a very good season so far and it will continue."

Hill returned as boss in January 2013 with Rochdale 14th in the division and already out of the FA Cup, having been defeated by Morecambe.

And, in addition to their impressive cup run this season, Hill has also overseen a big improvement in their league form, with Dale lying in second place, just one point behind leaders Scunthorpe.

Former Barnsley manager Hill says his second spell in charge at Spotland has been "incredible".

He added: "Rochdale have helped me and I am trying to give back. I like working with honest players who want to improve and want to play the way I expect the game to be played, with hard work and endeavour.

"It gives me an opportunity to get to 50 points, which would be magnificent. It has been an incredible 12 months."