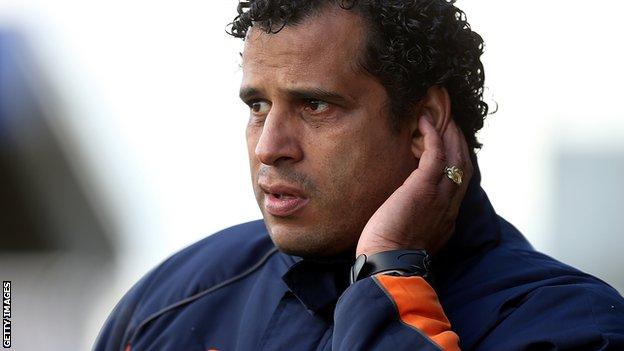 Barnet have announced Ulrich Landvreugd and Dick Schreuder "will take charge of all first-team footballing matters".

Director of football Paul Fairclough had taken over as interim manager of the Bees following the resignation of head coach Edgar Davids on Saturday.

Landvreugd and Schreuder were part of Davids' coaching staff at The Hive and were assisting Fairclough.

"The club are hopeful that they can turn total football into winning football," a club statement said.

Landvreugd, who came through the youth academy at Ajax, joined the Bees in October 2012 shortly after former Netherlands international Davids joined the club.

He has overseen training sessions and had previously taken charge of the side from the bench while Davids has been playing or absent.

The only thing missing from Edgar Davids' philosophy was winning matches, but the transition is very much in its infancy and I believe that Uli and Dick can develop our exciting style into a winning style

The north London club are currently 10th in the Conference Premier table, three points off the play-offs.

"The duo have helped build a solid foundation with Edgar Davids and started to create a footballing philosophy that all associated with the club can be proud of," the statement added.

"Paul Fairclough will be stepping to one side effective immediate after deciding that the duo should be given the opportunity to develop the brand and legacy left by Edgar Davids."

Fairclough's fourth spell in charge of the Bees saw the side lose 3-1 at Aldershot on Tuesday.

The 63-year-old said Davids, who played for Ajax, Juventus and Barcelona, had "left a big imprint and a footballing legacy" at the club which "can provide the perfect platform for the club to achieve wonderful things".

"The imprint he has left is something myself and the club have been searching for and instead of losing it what we need to do now is develop it," Fairclough explained.

"The only thing missing from this philosophy was winning matches but the transition is very much in its infancy and I believe that Uli and Dick can develop our exciting style into a winning style.

"Of course football is a results business so we will need to see how things work out over the next few weeks and then reassess the situation again."