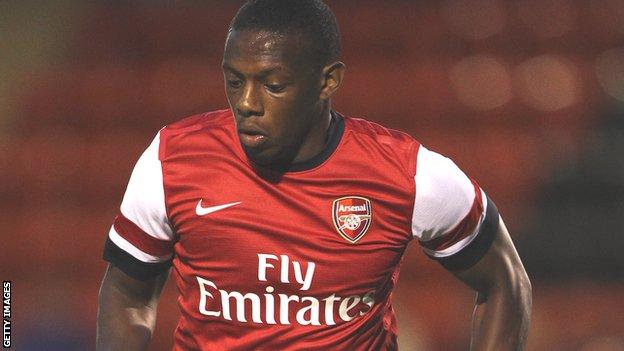 Wycombe Wanderers have signed former Arsenal striker Anthony Jeffrey until the end of the season, with the option of adding another year.

The 19-year-old left Arsenal by mutual consent earlier this week, having been at the club since he was eight.

He made his senior league debut on loan at League One Stevenage in March after a previous spell at Boreham Wood.

"He's an Arsenal player, so it's a coup for us." Wycombe boss Gareth Ainsworth told the club website.

"One thing we've been lacking this season is goals and I've brought in someone who I believe can help us in that department."

Ainsworth added: "It's been a bit of a patient one. Under-21 football is different to League Two and we've had to make a decision as to whether he can handle it.

"The physicality, the directness, the pitches, it's totally different to where he's been, but we feel he's got all the attributes to be a good player."