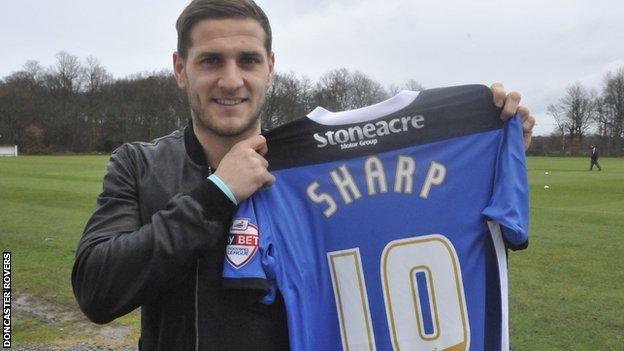 Doncaster loanee Billy Sharp has admitted that he lost some of his love for the game during his time at Southampton.

Sharp, 27, who last featured for the Saints in the League Cup win over Stevenage in August 2012, returned to Rovers for a third spell on Wednesday.

"It's been a frustrating season," he told BBC Radio Sheffield.

"I haven't had much game time and, I'll be honest, I lost the buzz for football because I wasn't playing games."

The former Sheffield United man scored 40 goals in 82 league games in his first two spells with the club before joining Southampton in January 2012.

He said his relationship with the Rovers fans played a part in him choosing to return to the Keepmoat Stadium.

During Sharp's previous spell with the club, he received widespread support after playing for Rovers only three days after his baby son Luey Jacob passed away in October 2011.

"The club is special to me and I'll always remember how good the fans were to me through everything," he added.

"Hopefully they can give me a lift and I can give the team a lift and help them get up the league.

"When I look back at that time I think it was selfish of me to have played because I wasn't in the right frame of mind but I managed to score and the fans were brilliant. I feel like I owe something to the club for how they supported me through that."