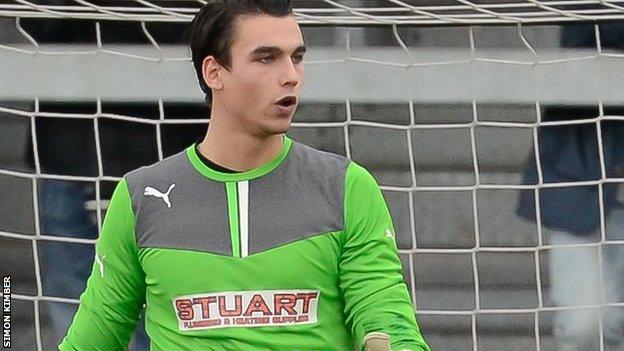 Derby have signed Nuneaton goalkeeper Kelle Roos on a two-and-a-half-year deal for an undisclosed fee, just two months after he joined the Conference Premier side on a free transfer.

The 21-year-old has kept five clean sheets in nine league games for Boro since his arrival in November.

Roos, an ex-PSV Eindhoven youth player, had spent a week at Liverpool before impressing the Rams on trial.

"He really has been in demand," Boro chief executive Ian Neale said.

"Just two months ago when he signed for us, not many English clubs knew much about him.

"Kelle will be missed at the club, despite him only being with us for a very short time. He has every chance of having a brilliant career."

Part of the deal for the Dutch keeper is that Derby will play a pre-season friendly at Liberty Way in the summer.

Before moving to England, where he started the season on trial at Bristol City, 6ft 4in Roos had spells with Dutch top-flight clubs Willem II Tilburg and NEC Nijmegen but failed to make a senior appearance.

Derby goalkeeping coach Eric Steele told the club website: "He is a young up-and-coming talent with potential and a good addition to the first-team squad."