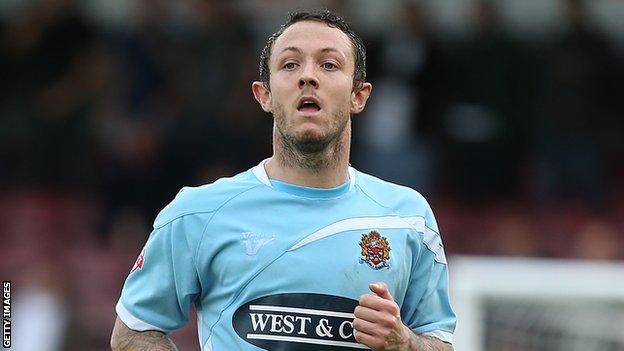 Dagenham & Redbridge striker Rhys Murphy has turned down a move to Peterborough after holding talks with the League One side.

The 23-year-old former Arsenal trainee, who has scored 12 goals in 28 appearances this season, was given permission to speak to Posh on Sunday.

A club statement said Murphy "does not wish to make such a move at this time".

Murphy, who joined the League Two club from Dutch side Telstar last summer, has a clause in his contract allowing him to speak to other clubs.

"The club felt obliged to give him the opportunity to speak to Peterborough United," the Dagenham statement added.

"Both the club and Rhys realise that if another opportunity presents itself, then that opportunity will be made available to Rhys as in this case.

"Many players sign for the Daggers with the hope that we can help develop their game, with the expectation that if they progress they can aspire for bigger and greater things.

"We feel and hope that this decision by Rhys will mean that further success with the Daggers will allow him to achieve even greater ambitions."

New addition Norris, 20, scored five goals in 12 appearances during a loan spell at Northampton Town earlier this season, having come through the youth system at Brentford, for whom he made his debut in April 2012.

"He's a player we've watched on a number of occasions that we believe can come in and give us more attacking options," said Daggers boss Wayne Burnett.