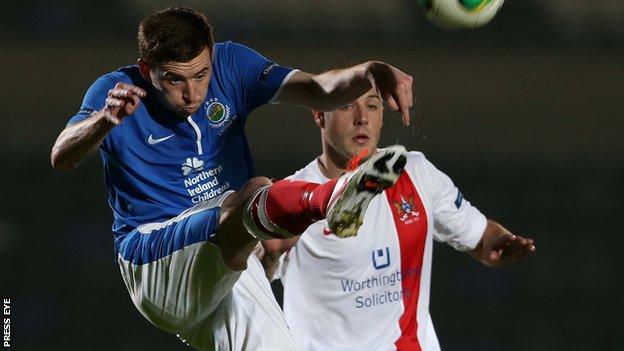 Linfield will be expected to extend their Premiership lead to seven points when they face bottom club Ards at Windsor Park on Friday night.

With neither Cliftonville nor Crusaders in action because of Saturday's League Cup final, it could be a significant night in the battle for the title.

The Blues will be without injured Aaron Burns with Mark McAllister suspended and Peter Thompson a fitness doubt.

Niall Currie's strugglers suffered another devastating reversal on Tuesday night as they crashed out of the Irish Cup after suffering a 3-1 fifth-round replay defeat against Championship 2 outfit Armagh City.

Michael McNamee is joined by Tommy Breslin at Shamrock Park as he presents coverage of Friday night's programme of Irish Premiership action on a Sportsound Special on BBC Radio Ulster medium wave and the BBC Sport website from 19:30 GMT.

The programme will have reporters at the other two games, which see Warrenpoint Town hosting Glenavon and Coleraine at home to Ballinamallard.

Ards led 1-0 at the break after missing a number of other chances but collapsed in the second half - as was the case in last weekend's Premiership defeat by Dungannon Swifts.

To make matters worse for the Premiership's basement club, Ryan Henderson suffered a broken foot in the defeat and he is expected to be out of action for at least a month.

Ards boss Currie strongly criticised his players's attitude in the defeat by Dungannon and his mood will not have been improved by their cup exit in midweek.

However, Portadown manager Ronnie McFall insists his team will face a stern test as "Dungannon are always up for it against us because it's a huge derby game for them".

Victory over the Reds moved the Ports into fourth place in the table, above Glentoran, who are not in action on Friday.

Player-manager Gary Hamilton is banned for their game at Warrenpoint Town after he was sent from the dugout late in last weekend's win over Ballinamallard.

Hamilton was sent to the stands after complaining about an elbow on Gareth McKeown which led to the defender sustaining a broken nose.

Tiarnan Mulvenna scored on his Glenavon debut last week and with Hamilton ruled out, could be partnered by Guy Bates in attack at Milltown.

Coleraine will be without Michael Hegarty for their game against Ballinamallard following his straight red card in Tuesday's thrilling Irish Cup replay win over Cliftonville.

After ending a dismal run of nine straight Premiership defeats by beating Ards on 4 January, Coleraine are now unbeaten in five games.

The Coleraine team's morale should be high after Tuesday's win over the defending champions.

Stephen Lowry could replace Hegarty for the Bannsiders after making his return to action after injury when coming off the bench on Tuesday.