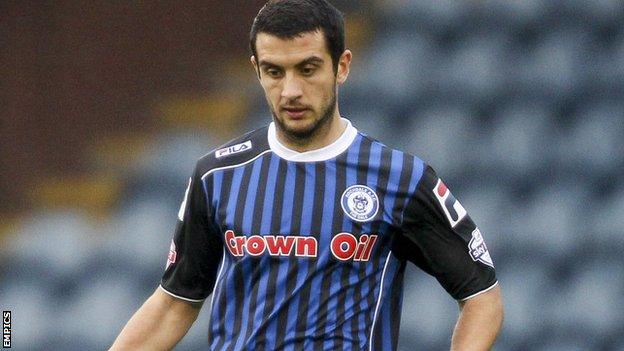 League One side Crawley have completed the signing of Rochdale midfielder Gary Dicker on a free transfer.

The 27-year-old made 15 appearances for Dale after joining the League Two side on a short-term deal in September.

Dublin-born Dicker, who spent more than four years with Brighton before leaving the Amex last summer, will be with the Reds until the end of the season.

"It's a great move for me personally because my family are down here and it has been hard commuting," he said.

Crawley boss John Gregory said the West Sussex side had been monitoring Dicker for some time.

"He's a really good ball-playing midfielder," Gregory told the club website. "He gets stuck in but he's also very good on the ball and he is really keen to make this move work for him.

"We have taken him initially until the end of the season but if all goes well I can definitely see him being here beyond that. That's up to Gary, of course, but he has all the attributes to be a success at this football club for a long time to come."

Dicker, who is based in Steyning, says footballing reasons were among his decision to join the club.

"Looking at the table, I think we still have a lot to play for this season," the Irishman said.

"We've got 22 games left and 66 points [to play for] and we definitely have the quality here to climb the table and get involved in the play-offs."