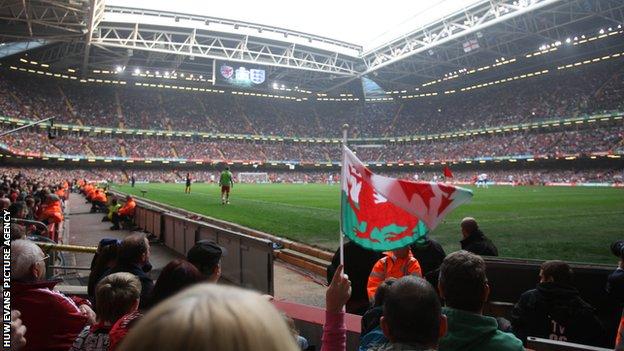 All of Wales' home qualifiers for the 2016 European Championships will be based in Cardiff.

FAW chief executive Jonathan Ford says matches for the campaign will either be played at the Cardiff City Stadium or Millennium Stadium.

"I think that's a great decision to help us market those matches in the best possible way," said Ford.

He says friendly matches could be played elsewhere at venues such as the Liberty Stadium in Swansea.

"Taking the team nomadically around the country has got certain benefits, especially for friendly matches but for qualification matches, having a base in Cardiff is totally making sense," said Ford.

Ford says the decision to play matches at either the Cardiff City Stadium or Millennium Stadium will be based on what is best for Chris Coleman and his players.

"It's not just a marketing decision," said Ford.

"We have to give our team the best chance of qualification.

"If the demand is there we will take it to the stadium which suits us best."

Wales first played a World Cup qualifier at the Millennium Stadium in 2000 against Norway. and played all their major qualifying matches there until October 2010.

Dwindling crowds and the team's struggles on the pitch prompted the FAW to move matches to the Cardiff City Stadium and the Liberty Stadium.

The last time Wales did play a major international there was the Euro 2012 qualifier against England in March 2011.

Following the match Wales players Aaron Ramsey and Ashley Williams were critical of the quality of the stadium's pitch.

Earlier this year the Welsh Rugby Union announced they were considering installing a Desso pitch, which intertwines grass turf with millions of artificial fibres.

It is similar to those used at Cardiff City and Swansea City's stadiums.

"We would hope of course that the pitch has improved which it looks like it's going to be with the Desso," said Ford.

"Hopefully if our team is doing well then 72,000 fans will want to come to our matches."