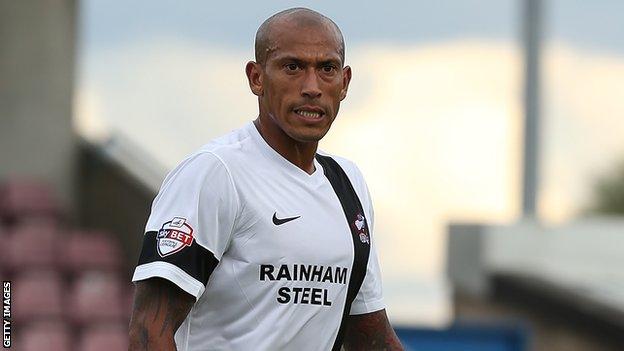 St Johnstone have confirmed the signing of former Scotland striker Chris Iwelumo until the end of the season.

The 35-year-old had been

but made the last of his 14 appearances on 19 November.

St Johnstone had been thwarted in a bid to bring Scotland striker David Goodwillie to Perth on loan from Blackburn Rovers.

He has a good physical presence about him, which we are looking for

Saints manager Tommy Wright, who had said 24 hours earlier that he was told his club website: "I'm delighted to get someone with his experience.

"He'll bring a lot on and off the park, he has played at a good level and has the knack of scoring goals.

"Also, importantly, he has a good physical presence about him, which we are looking for."

Coatbridge-born Iwelumo, who has four international caps, moved to Scunthorpe after two years at Watford.

He began his career with St Mirren and went to sign for Aarhus Fremad, Stoke City, Alemannia Aachen, Colchester United, Charlton Athletic, Wolves and Burnley before switching to Vicarage Road in 2011.