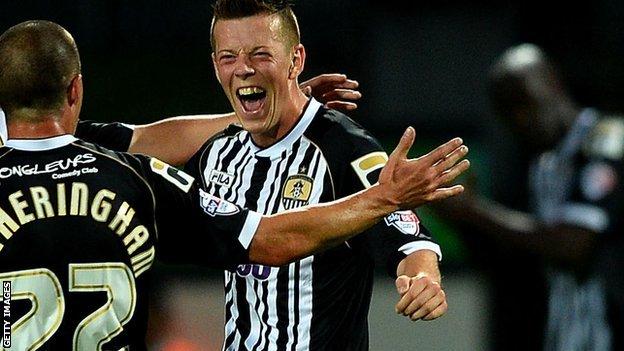 Celtic midfielder Callum McGregor has returned to League One Notts County on loan until the end of the season.

The 20-year-old netted 12 goals in 27 appearances before his initial deal expired after scoring in the Magpies' 3-0 win against Bradford on 1 January.

Notts manager Shaun Derry said re-signing the Scotland Under-21 international comes as a "major boost" after Wolves also pursued him.

"It has been a topsy-turvy deal," Derry told BBC Radio Nottingham.

"We have the backing of some real good people up at Celtic who realise just what position he is in in his development. We also realise that we have a very good player on our hands.

"We absolutely love him at Notts County and we will continue to try nurture him into the player we think he can be."

The deal comes a week after tying up a new agreement to keep influential Aston Villa midfielder Jack Grealish at Meadow Lane for the rest of the season.

While the Magpies have won two of the three games that McGregor has missed this month to climb out of the relegation zone, both loanee midfielders are regarded as key figures in their fight for League One survival.

"I think it is a massive boost for everybody, not just me and the fans but for Callum as well," Derry said.

"He has really missed playing the last couple of games and here against Sheffield United he was our biggest fan. Thankfully it's over the line and he can concentrate on his football again."

Bell, 30, played 13 games for Notts this season, but has not featured since the 1-0 home loss against Wolves in November.