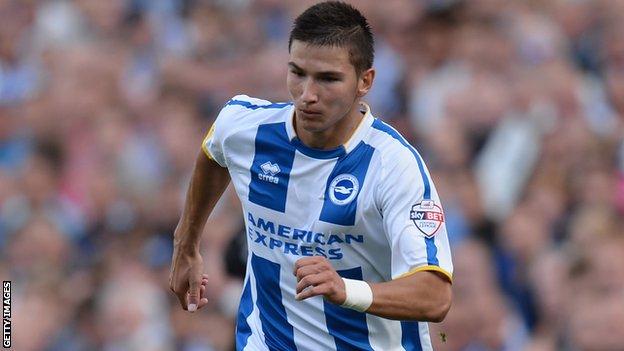 Kilmarnock have concluded the loan signing of defender Vitalijs Maksimenko from Brighton in time for Saturday's match against Inverness CT.

The 23-year-old Latvian trained with Killie on Friday and, if international clearance comes through, he could make his debut at Rugby Park.

Maksimenko is a replacement for Darren Barr, who is underwent hip surgery on Thursday.

Barr is expected to be on the sidelines for the rest of the season.

I know Alexei loved his time here before and he's an undoubted talent. He can see a pass and unlock defences

The 28-year-old former Hearts and Falkirk defender has not played since the end of November.

Maksimenko, who moved to Brighton last January from Skonto Riga, has featured just twice for the Seagulls this season but remains a regular at international level and can play in central defence or at left-back.

"I'd imagine he will be the only one in for this weekend," manager Allan Johnston told BBC Scotland. "But we have been speaking to a number of players."

Kilmarnock are also continuing their pursuit of Alexei Eremenko, the Finland playmaker who spent season 2010-11 on loan in Ayrshire.

And Johnston thinks the 30-year-old midfielder could provide the creative spark the club need at this time.

"He's the type of player we are trying to bring in," he added. "We're definitely interested, but whether we can do a deal remains to be seen.

"I know he loved his time here before and he's an undoubted talent. He can see a pass and unlock defences."

Chairman Michael Johnston is dealing with the negotiations over the player who left Kilmarnock for Rubin Kazan and is presently with Kairat Almaty in Kazakhstan.