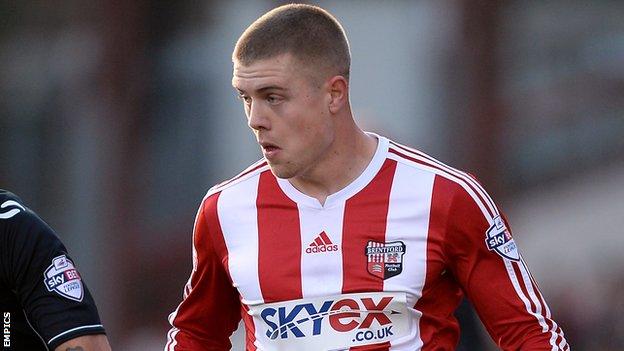 Brentford's Jake Bidwell says other sides should fear them as they are on their 15-match unbeaten league run.

The Bees lost four of their opening 11 games in League One but they have since taken 41 points from a possible 45.

"It took time to gel but over the last few months we have got a consistency to our play and it is showing. I think we are a team to be feared."

Brentford's last league defeat came at Stevenage on 12 October, which left them 11th in the table - 14 points behind leaders Leyton Orient.

Since then the Bees, beaten in the play-off final last season, have won 13 out of 15 games, keeping eight clean sheets in the process.

I'm a defender first and foremost but if I can help the lads going forward that would be nice. It is something I am concentrating on and trying to get better at.

"We had a lot of players coming in over the summer so maybe that was a reason," Bidwell added.

"One extra motivation is getting so close last year. It is gone now but I think it does spur you on."

Bidwell has made 23 appearances for the west London side this season after joining the Bees from Everton for an undisclosed fee.

The former England Under-19 international, who made 75 appearances for Brentford during two previous loan spells at Griffin Park, is keen to improve his own game.

"I'm a defender first and foremost so I have to concentrate on that but if I can help the lads going forward with assists or chip in with a few goals that would be nice," he said.

"Being a full-back now it is about your all-round play. You look at the likes of [Barcelona's] Jordi Alba and [Everton's] Leighton Baines who are probably two of the best in the world.

"They are not the best in the world just for defending but for their attacking play as well. It is something I am concentrating on and trying to get better at all the time."

Bidwell came through the youth ranks at Everton and says he would love to emulate England international Baines.

"He is probably one of the best, if not the best, in the country," he said.

"From my time at Everton and seeing him close up, I think you have got to aspire to get to that level. You want to bring the best out of yourself."