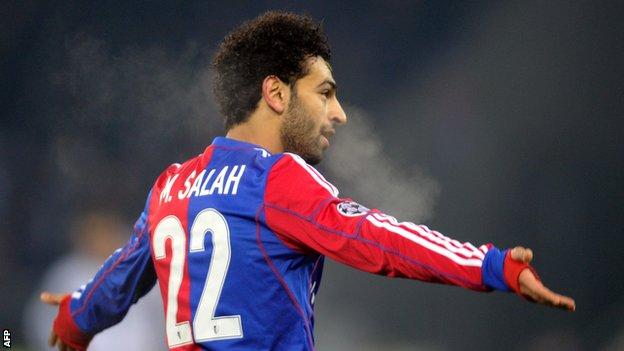 Chelsea have signed Egypt midfielder Mohamed Salah from Swiss champions Basel for a fee in the region of £11m.

The 21-year-old, who will wear the number 15 shirt, has signed a five-and-a-half-year deal.

He made 47 appearances for former club Basel, whom he joined in June 2012, scoring nine goals.

"I'm very happy to sign for Chelsea. I hope I can make the Chelsea supporters happy and have a good career at the club for many years," said Salah.

"Mohamed Salah is a player with vast potential. He is an exciting, swashbuckling winger whose searing pace is his most destructive weapon. He also has an eye for a goal.

"He is still raw but at 21 will learn quickly. He is a player Liverpool have watched for some time, but once again Chelsea have nipped a transfer target from under the Anfield club's noses."

But he became Blues manager Jose Mourinho's third signing in the January transfer window, following the arrivals of Nemanja Matic and Bertrand Traore.

His signing comes after Chelsea sold midfielder Juan Mata to Manchester United for £37.1m on Saturday and will offer Mourinho a further attacking option, after Kevin De Bruyne's move to Wolfsburg.

Salah, who can operate in a variety of attacking roles, has been tracked by a number of clubs after impressive displays in the Europa League last term and in this season's Champions League.

He scored against Chelsea in the semi-finals of the Europa League in 2013, before netting in both Champions League matches against them this season.

"First of all, he won't score against Chelsea - which is a good thing," Mourinho said.

Salah at home in England

"But, speaking seriously, we had to react to the Mata situation. We had to go for a young player, for a left-footed player and for a fast player - especially who is fast in the space because most of my attacking players are fast and fast with the ball.

"Salah is a kind of player that looks for the space and tries to get behind people so we think he was a good choice."

After starting his career at Egyptian side El Mokawloon, Salah moved to Basel in 2012 and scored five league goals in 29 appearances as they secured a fourth league title in as many seasons.

His form this season has helped Basel to top spot in their domestic league ahead of its resumption after a winter break.

Salah, who made his Egypt debut in 2011, finished as joint-top goalscorer in Africa's World Cup qualifying groups with six goals.

He was, however, unable to help his country to Brazil 2014 as they were beaten over two legs by Ghana in a play-off.