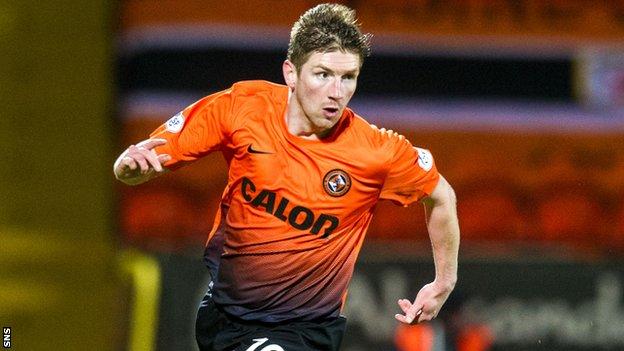 Mark Wilson has agreed a new 18-month contract with Dundee United and says his return to Tannadice has rekindled his love of football.

The former Celtic full-back's career stalled following a disappointing spell at Bristol City and he was freed by the Robins at the end of last season.

But Wilson was given a six-month deal at United in the summer.

"I've loved playing and it's giving me that appetite again for playing in the league," said the 29-year-old.

Wilson, who made his United debut at 17, has been sharing the right-back spot with Keith Watson - five years his junior.

"I'm their first choice and I think he thinks he's the same, but I'm happy with that," he joked.

"Keith's obviously a lot younger than me and he's perhaps going to play more games than me, but the position's up for grabs.

"I think the two of us have done okay when we've been in there - as long as we're helping the team out, it's a good thing.

"In my career, I've never been an out-and-out first-choice player to be honest.

"When I moved to Celtic I played regularly in my first season but when I started picking up more and more injuries, there was other right-backs to compete with, like Andy Hinkel, Adam Matthews, Cha Du Ri.

"It was the same at Bristol with Richard Foster."

Wilson, capped once for Scotland, is delighted to have his future settled, despite not playing every week.

"I think we've agreed on the rest of this season and next season and I have to get across to Tannadice to sign it," he explained.

"It's good for me to have that kind of stability behind me and know I'm going to be in the one place for a season-and-a-half.

"It was always the case that, when I secured a place in the team here, I would be looking for a longer-term deal.

"I came here without a club, training and the manager gave me a chance to come here and play for six months and prove myself.

"I was hard the last few months at Bristol where I wasn't in the squad and was spending my weekends watching Soccer Saturday while my team-mates are out there playing. It was a nightmare. I was down in the dumps then but now it's great to be playing."