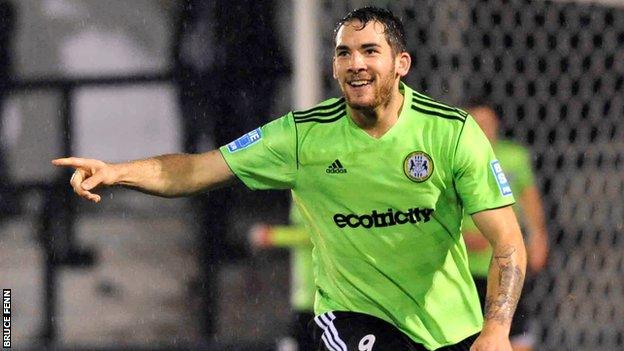 Wycombe have signed striker Reece Styche on loan from non-league Forest Green until the end of the season.

The Conference Premier club will receive an undisclosed fee as part of the deal.

Styche, a 24-year-old former plumber, returned from a long-term knee injury in November and has scored once in six appearances so far this season.

Since joining Rovers in 2010 he has scored 34 goals in 109 games, but his current deal runs out in the summer.

Forest Green manager Ady Pennock told BBC Gloucestershire: "It's a good deal for the club, which is important, but it's good for Reece as well. I don't want to stand in anyone's way of playing league football.

"He's so excited and obviously wanted to go there. He was a plumber not so long ago and now he's going to be a footballer in the Football League.

"Fair play to him - he's worked really hard and is a great character."

Styche told the Wycombe website: "It was always my aim to play in the Football League by the time I was 25, so thankfully that's a goal I've achieved."

"Playing football is all I've ever wanted to do and the injuries have done my head in. It's just showing mental strength to get back out there and show what I know I can do."