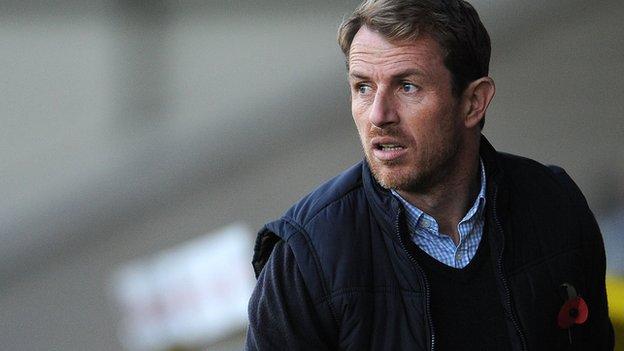 Burton boss Gary Rowett admits the club is struggling to compete financially in the transfer market as he looks to sign a new striker.

The Brewers are currently third in the League Two table, but have only scored 29 goals in 26 league games.

Rowett missed out on Michael Smith, who joined Swindon Town from Charlton.

I've heaped a lot of praise on strikers and wide players in recent weeks and months, and they have to start coming up with the goods

"He's gone for something around six figures, I believe. At that sort of level, we are not going to be able to compete," he told BBC Radio Derby.

"But they are the players we want, the ones that we are after and the ones we will continue to keep making enquires for.

"There are hundreds of players that we could go out and get tomorrow - the key is, it has got to be the right one."

Billy Kee and Adam McGurk are Albion's joint top scorers in the league with seven goals each so far - and Kee is leading the way in all competitions with nine.

However, Burton have the third best defensive record in the division, conceding only 23 goals, and having kept 12 clean sheets.

"We have had the most shots this season of any League Two side by some distance. What worries you about that is that we are among lowest on goals scored," Rowett said.

"You can look at that two ways - that we have been creating chances and been a little unlucky not taking them and the goals will come, or it's 26 games in and say that we have to do more, certainly in those areas.

"I've heaped a lot of praise on strikers and wide players in recent weeks and months, and they have to start coming up with the goods.

"It is not something we are going to leave to chance, and will try strengthen those areas if and where we can."