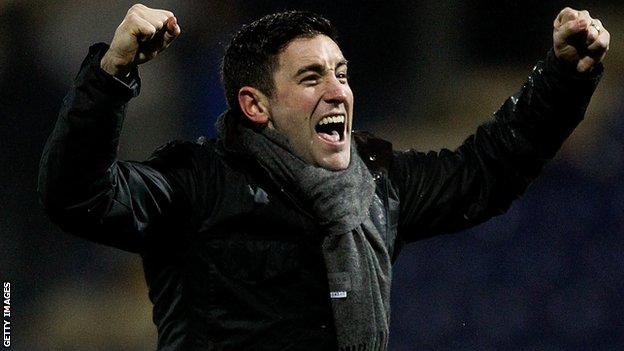 Oldham manager Lee Johnson has extended his contract with the club until 2018.

Johnson, 32, is the Football League's youngest manager and was appointed in March 2013 on a two-year deal, replacing Paul Dickov.

"I am loving working here, it's been an unbelievable topsy turvy year but I am loving it," he told the club website.

"The new contract extension makes me feel valued by the owner and the board. I know I will get it right and that I will be given time to do that."

He beat 120 other applicants to land the job, having made his name as a player at Yeovil, who he helped win promotion to the Football League in 2003 and to the League Two title two years later.

Johnson, whose father Gary is the current Yeovil manager, has so far been in charge of the Latics in 46 games, winning 16.

"I have got greyer, grumpier and have put a bit of weight on, but I'm loving it, I love the club," he added.

"I have been here around 10 months, which places me about 40th in the list of long-serving managers, which shows the state of football at the moment."

Oldham are currently 17th in League One, only one point above the relegation zone, and come up against promotion hopefuls Peterborough in their next game.