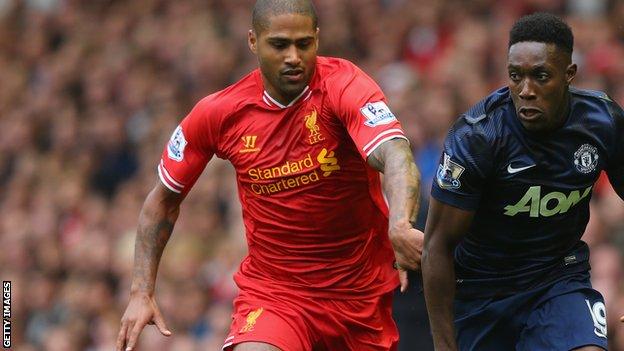 Liverpool and England defender Glen Johnson faces an "indefinite" period on the sidelines with injury, according to Reds manager Brendan Rodgers.

The 29-year-old missed five games earlier in the season with an ankle injury and has broken down again after Saturday's 2-2 draw with Aston Villa.

Injured at the back

"The timeline he'll be out will be indefinite really," said Rodgers, who is not prioritising defensive signings.

"I just think it's now at that point where we need to get him right."

Liverpool have slipped from top of the Premier League on Christmas Day to fourth, eight points adrift of leaders Arsenal.

Their dip in form has coincided with injuries to a number of key players, notably defenders Daniel Agger (calf), Jose Enrique (knee) and Mohamed Sakho (hamstring), while defensive midfielder Lucas Leiva was ruled out for two months earlier in the week.

Sakho and 21-year-old full-back Jon Flanagan could return for Tuesday's Merseyside derby at Anfield, but the club have not clarified the exact problem which will keep Johnson out.

"Glen has played a lot of the season having been injured and really put himself out for the team but unfortunately he's struggled a lot with a number of injuries," added Rodgers, 40, whose side face Bournemouth in the FA Cup fourth round on Saturday.

"He's had a real bad ankle for a period of time and just one or two other issues that haven't allowed him to be 100%.

"We've got a lot of defenders and I'm not sure we need many more in - my first look will always be towards the young players."

Rodgers had just 15 players available to train this week and the Reds are yet to sign anyone in the January transfer window after missing out on Basel for midfielder Mohamed Salah, who looks set to move to Chelsea in an £11m deal.

"There have obviously been targets we've looked at but there's nothing imminent," added Rodgers.

"We've looked at a number of players. I'll not give away any names, I'll never do that.

"We'll just see what the window brings for us. We're in the market for players to help the squad and if we can bring them in then great."