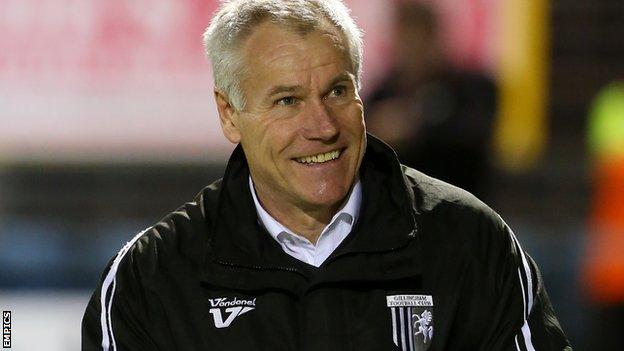 Gillingham manager Peter Taylor says he will not offer any new deals to players until they are safe from relegation.

A host of first-team squad members are out of contract at the Kent club this summer, who are 14th in League One.

"All I have ever said to the players is, as far as I am concerned, we have to go and get ourselves safe straight away," Taylor told BBC Radio Kent.

"The last thing we need is to be in a situation where we secure people's services for next year and they relax."

Gillingham only won two of their opening 11 league fixtures this season, which led to the dismissal of boss Martin Allen in October.

If players are playing well and helping us get results, I can't for the life of me see us turning round and not offering them work for next year. It is a win-win situation for them

Ex-Leicester, Brighton and Hull manager Taylor initially took charge of Gillingham on an interim basis and was then handed the job full-time in November on a deal until the end of the season.

The 61-year-old has won seven of his 16 league games in charge of the Gills, who are currently six points above the relegation zone.

Taylor is eager they secure their place in the third tier for a further season - and is determined that every player contributes to the club's efforts.

"We are in a decent situation at the minute and we have improved but we are not safe," he said. "We need to go and get at least another 20 points I think.

"If we do that we can then start talking to players. If we are finishing off the season well then we can think about building for next year.

"If players are playing well and helping us get results, I can't for the life of me see us turning round and not offering them work for next year. It is a win-win situation for them.

"They have got to be in the team, get some wins for us and the club then gets safer quicker. Then we can move on."

Taylor's own deal runs until the end of the season but he is remaining relaxed on his own future.

"I'll be honest, if the team stay up I think there is a good chance I would get offered the chance to manage next year," he said.

"If the team go down there's a fair chance I wouldn't get offered [the job]. I am very realistic on that.

"I want the first one and us to get enough points to stay in the division. I'd love the opportunity to build a team."

Taylor also says that, as yet, no discussions have taken place with Gillingham chairman Paul Scally about extending his deal at Priestfield.

"The chairman and myself have known each other a long time," he added. "We get on exceptionally well and we don't worry about things like that. He knows I am not a worrier in that respect.

"He knows I will ring him up or bang on his door if we get enough points to stay up."