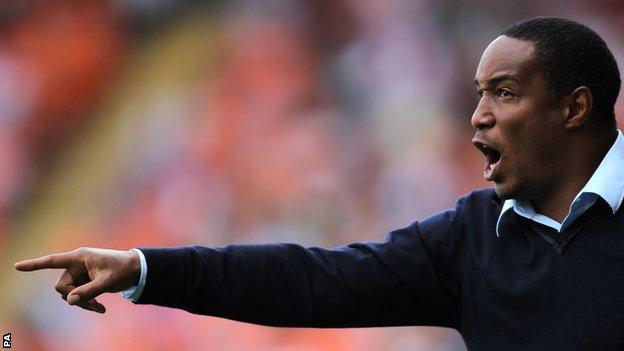 Paul Ince says he is "deeply disappointed" to have been told about his sacking as Blackpool boss in a text message from the Championship club.

The ex-England star left the Tangerines on Tuesday after less than a year.

Ince, who said his exit came without warning, expressed "sadness" at the decision and the manner in which he was told of his sacking.

Blackpool chairman Karl Oyston said the 46-year-old was informed about his exit by "letter and text message".

The Seasiders have dropped to 14th in the Championship after failing to win since 30 November.

Ince, who replaced Michael Appleton in February 2013, led the side to the Championship summit after five wins in their opening six games.

But he was given an unanimous vote of no confidence by the Blackpool Supporters Association following Saturday's 2-0 defeat at bottom club Barnsley.

"It was deeply disappointing to have been notified that my contract was to be terminated via text message after a lengthy meeting with the club chairman on Sunday," Ince said in a statement released by the League Managers' Association.

"No indication was given that any of the coaching staff, myself included, were going to lose their jobs.

"Neither I nor my coaching staff received a telephone call from the chairman at any stage after this meeting."

In an interview with Sky Sports, Oyston said he could not speak to Ince by telephone because the ex-Manchester United midfielder was taking part in a coaching course at St George's Park.

Oyston added he was unhappy with Ince's decision to complete the final phase of his Uefa Pro Licence instead of pursuing transfer targets.

"It disappoints me that I have been accused of failing to produce a transfer target list," said Ince.

"Whilst recent results have been of concern, we had identified key targets in the January transfer window to improve the squad."