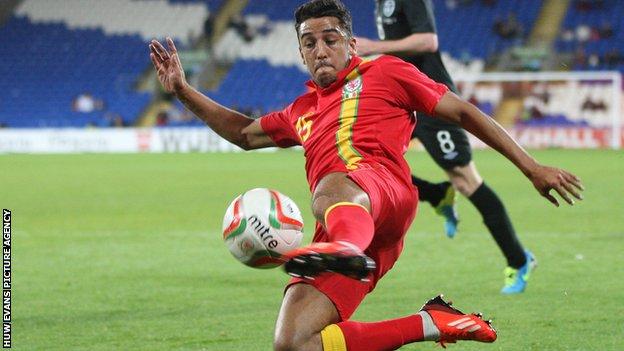 Former Wales captain Kevin Ratcliffe says Neil Taylor may feel he has to leave Swansea for the sake of his international career.

Swansea have rejected a bid from Fulham for the 24-year-old Wales left-back.

Taylor has found it hard to get back in Michael Laudrup's side after injury due to the emergence of Ben Davies.

"Obviously if he's not getting match time and Ben Davies is, then he's not going to be first choice for Wales," said Ratcliffe.

"If he can get a game at left-back at another club then obviously he's putting pressure on the manager to pick one or the other."

Taylor is back to full fitness after being dogged by injury problems for the last few seasons.

The 14-times capped Wales defender suffered multiple fractures and a dislocation to his ankle in September 2012.

Davies emerged at the Liberty Stadium during Taylor's enforced absence and is now his main challenger for club and country.

Ratcliffe, who played at the heart of the Everton defence in the 1980s, believes Davies could eventually move into a more central defensive position.

He says there may be room for both Taylor and Davies in the same Wales and Swansea starting XI, should Taylor stay at the Liberty Stadium.

"When they have been available we've seen Ben Davies play at centre-back for Wales and I do think if you want to change it and play him in a three-man defence then he can play Ben there, on the left side of defence," said Ratcliffe.

"[Dwight] Tiendali for me has not been as good as he has been and can be better and when [Angel] Rangel's missing there is a big hole to fill there."