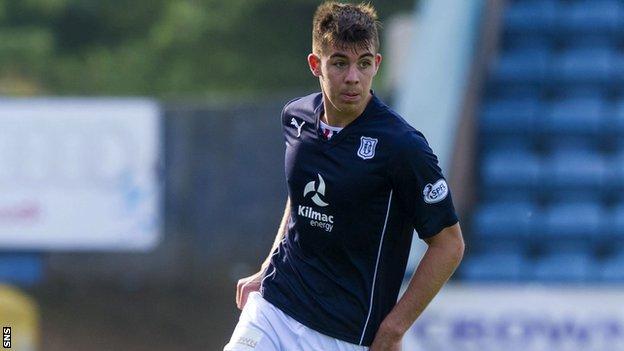 Declan Gallagher's future at Dundee is in doubt due to an ongoing dispute between the Championship leaders and the defender's representative.

The 22-year-old centre-back is out of contract in the summer.

Agent Jim Harkins says repeated requests to discuss new terms for Gallagher have been turned down.

However, Dens Park director Steve Martin told BBC Scotland that the fees demanded by the agent were responsible for the impasse.

"I can confirm that both chief executive officer Scot Gardiner and director of football John Nelms have been in negotiations directly with Declan's family for a few weeks now and the agent was fully in the picture," said Martin.

"We have what we believed a verbal offer agreed. The stumbling block is the ludicrous fees demanded by the agent."

Gallagher came through the Celtic youth system and joined Dundee from Clyde in the summer of 2012.

He made 28 appearances last season as the Dark Blues were relegated from the top flight and this term he has been a first pick in defence, chipping in with four goals for John Brown's side.

"It's disappointing to have to go to another board member to prompt a response from the CEO after continually calling and e-mailing him to find out what the club's position is," said Harkins.

"It is also important to note that a player described by his own manager as the best in the division deserves to be treated better.

"We were first approached about a contract extension in December 2012 after the Celtic game. He is now in a position to speak to other clubs and that's what we intend to do at this stage."