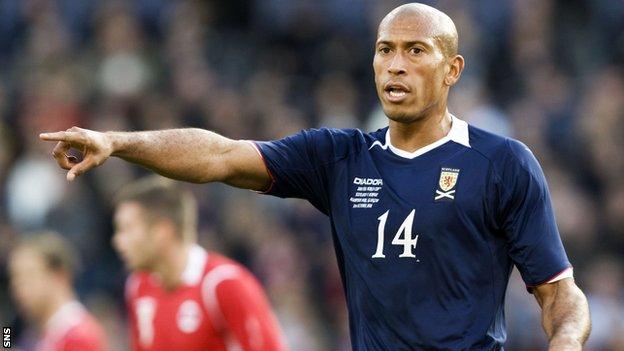 New St Johnstone striker Chris Iwelumo insists he has joined the Perth club to complement Stevie May, not replace him.

The 35-year-old has agreed a deal until the end of the season and cannot wait to play alongside the in-form May.

"The young chap is on fire and it's well documented that it would take a sizeable offer (for the Saints to sell him)," Iwelumo told BBC Scotland.

"The gaffer said that we need to keep everyone at the club to keep pushing on."

May, almost 15 years junior to Iwelumo, has knocked in 20 goals for the Perth side this season and has attracted offers from Peterborough and Rotherham.

But manager Tommy Wright is confident the Scotland U21 international will remain at McDiarmid Park beyond January.

"Unless it's an unbelievable offer, I think he'll still be at St Johnstone until the end of the season," he told BBC Scotland on Wednesday.

Iwelumo, who was released by Scunthorpe this month, has been impressed by May and is eager to pass on some of his knowledge as he prepares to don the colours of his 17th club.

"I know he works his socks off," he said of May. "He's non-stop from the first minute to the last and maybe I can be there to tell him when to hold his horses.

"He's scoring goals and that's what strikers are paid to do. Hopefully, the goals keep coming and I'll add a few as well."

Iwelumo has never played in Scotland's top flight, having left St Mirren in 1998 when the Paisley side were in the second tier.

"I can't wait to get started. I'm looking forward to getting some games, some goals and moving up that table," he enthused.

"I'm feeling fit and hopefully I can hit the floor running.

"St Johnstone are flying; a young squad with a few experienced heads. The gaffer didn't really have to sell the club to me.

"It's ticking along nicely and I'm coming in to add a bit more experience. I've always looked after myself, I'm feeling great and I've scored goals everywhere I've been."

Iwelumo was capped four times for Scotland and is best known to the Tartan Army for a close-range miss on his debut against Norway in 2008.

Having come off the bench, the then Wolves striker somehow skewed the ball wide of an unguarded net from three yards in a game that ended 0-0.

"It was a low point in my career but it has shaped me and strengthened my character," he explained.

"You've got to remember that season I scored six goals for Wolves before the miss and another 10 goals after it.

"It was a difficult time. I'm Scottish born and bred and it was one of the proudest moments of my career, representing my country.

"It was a sucker punch, given the form I was in at the time."