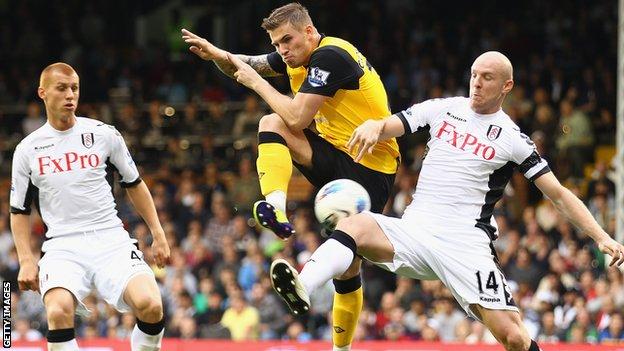 Blackburn Rovers and Scotland striker David Goodwillie will complete a loan move to fellow Championship side Blackpool on Friday.

The 24-year-old will spend the rest of the season at Bloomfield Road.

Goodwillie's lawyer Liam O'Donnell, of Pro-Legal Sports Management, told BBC Scotland: "This is a great opportunity for David to get back playing football regularly.

Former Rangers midfielder Ferguson is at the helm following the sacking of Paul Ince earlier this week.

It is understood Blackburn will monitor Goodwillie's progress at Blackpool before deciding in the summer whether he has a future at Ewood Park.

He joined Rovers in August 2011 on a four-year deal from Dundee United in a deal initially thought to be worth £2m.

Goodwillie had a brief loan spell at Crystal Palace last season before returning, also on loan, to Dundee United in August.

He scored three goals in nine Scottish Premiership starts for the Tannadice outfit.

Earlier this month Dundee United chairman Stephen Thompson confirmed he would not be extending Goodwillie's loan.