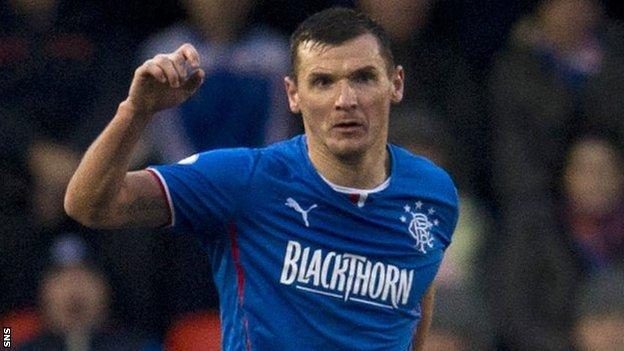 Rangers captain Lee McCulloch claims there is little difference in standard between the Scottish Premiership and League One.

And he believes his team deserve more credit for taking 61 points out of a possible 63 so far in the third tier.

"Having played in the SPL myself before, I don't think there's that much of a gap between the top flight and League One," said McCulloch.

"And I don't mean that disrespectfully to anyone."

There was another upset at Celtic when Morton beat them at home and that just shows, if you drop one per cent or hold off half a yard, you'll get punished

Rangers' only meeting this season with a team from a league above was a 3-0 away win over Championship outfit Queen of the South in the Challenge Cup in September.

The Ibrox side's only defeat of the season came against Forfar Athletic in the League Cup in August.

McCulloch, ahead of hosting Arbroath on Saturday, said at a neutral venue and in the League Cup proved his point.

"It's a very thin line between the teams in the division we are currently in and the Premiership," he told Rangers' website.

"You look at Motherwell and they went out to Albion Rovers in the Scottish Cup this season, who weren't even at home.

"There was another upset at Celtic when Morton beat them at home and that just shows, if you drop one per cent or hold off half a yard, you'll get punished.

"I think a lot of credit has to go to all our boys and the management for handling that. We've been really good this season, albeit we've not played every game the way we've wanted to.

"That happens every season. I just think with the amount of games we've won, we've done well and we've set a standard in the dressing-room."