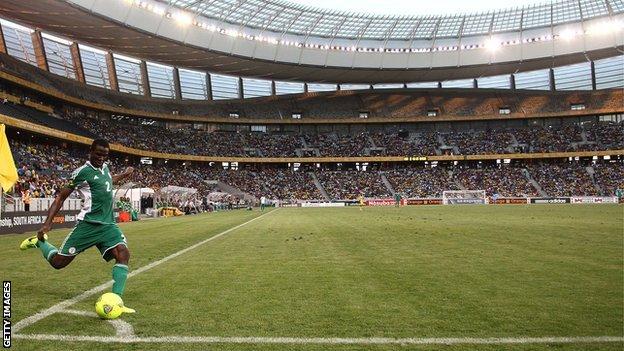 Nigeria and Ghana are in line for a semi-final clash at the African Nations Championship in South Africa if both can win their quarter-final clashes this weekend.

The local Super Eagles take on Morocco in Cape Town in the first of the last eight games on Saturday.

That is followed by Mali against Zimbabwe at the same venue.

On Sunday, Gabon face Libya in Polokwane before Ghana play DR Congo in Bloemfontein in the last quarter-final.

Tournament organisers are waiting to see the impact of hosts South Africa being knocked out in the group stages.

The prospect of traditional rivals Ghana and Nigeria meeting in the last four could spark renewed life into the event.

As could the continued success of Zimbabwe, who have attracted large crowds of expatriate supporters to cheer on their team.

Nigeria have been improving since they lost their opening clash to Mali and they play a Moroccan side, who have lacked a killer instinct in front of goal.

"We have been getting stronger with every game we've played," Nigeria coach Stephen Keshi said.

"Many of our players haven't played in front of big crowds, in such big stadiums or under lights.

"And with our league having stopped a few months ago, they were also lacking sharpness but I've seen an improvement as the tournament has progressed."

Rabiu Ali and Christantus Ejike have not only grown in stature as the tournament progressed but they've also chipped in with vital goals from midfield.

But while Keshi's side have looked good on attack, having scored eight goals so far, they have also been vulnerable in defence conceding five times.

Morocco's coach Hassan Benabicha is confident that his team, which contains seven members of the Raja Casablanca side that reached the Club World Cup final in December, can beat Nigeria.

"We started the tournament poorly with two draws, but we have picked up our momentum at the right time and we are looking forward to the quarter final stage now," he said.

"We know what to expect against Nigeria, we must prepare well for our game against them, and why not beat them and reach the semi final."

In Saturday's other game Mali should prove too strong for a Zimbabwe team that have scored just once so far in the tournament.

Kudakwashe Mahachi, their 20-year old winger, has been one of the tournament's star performers with his pace and skill down right flank, but he has found no takers for the quality crosses he has been able to deliver into the danger area.

Mali's physical approach and the quality of youngsters like 18-year-old Adama Traore, 21-year olds Abdoulaye Sissoko and Ibourahima Sidibe, who scored crucial goals against Bafana Bafana and Mozambique, should see them through to the semi finals.

Ghana have a chance to avenge their 2-0 defeat at the hands of the DR Congo in the inaugural final in 2009 when they meet on Sunday.

The Ghanaians have not been entirely convincing in their group games managing narrow 1-0 wins over Congo and Ethiopia and being held 1-1 by a young Libya side.

They will have striker Yahaya Mohamed back from suspension while midfielder Sulley Mohammed is also expected to recover from his injury.

Libya came to the tournament with the aim of preparing a side for the 2017 Africa Cup of Nations which they are scheduled to host.

They have impressed with their organisation and tactical discipline instilled in them by former Spain international Javier Clemente, and should start favourites against Gabon.

With US$750 000 on offer for the winners and US$400 000 for the runners up, there will be lots more than national pride to play for, which should make the knockout stages very interesting and tense affairs.