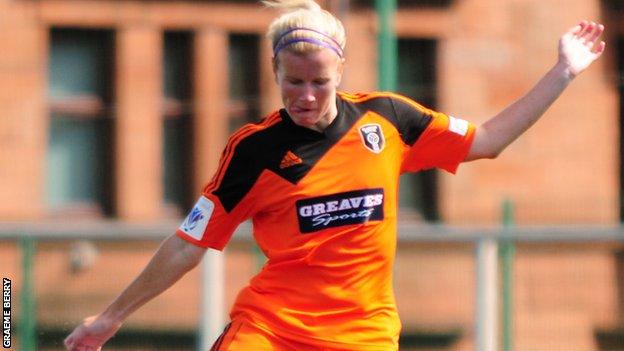 Glasgow City are preparing for the new season with a trip to Germany and high-profile friendlies against Everton and Manchester City.

Those games are sure to provide stern tests for a side expected to continue their domestic dominance.

But they will also serve as getting-to-know-you exercises since last term's treble-winning squad has been shorn of many of its key players.

Rachel Corsie has already left to join Notts County, while fellow Scotland defender Eilish McSorley has told City she is looking for a new club.

All three had been wanted by head coach Eddie Wolecki Black for the coming season, while Wales midfielder Jess Fishlock has returned to Seattle Reign, via a stint in Australia, at the end of her loan period.

Scotland striker Suzanne Mulvey has moved on to Rangers, defender Lisa Robertson has returned to Hibernian, while midfielder Danni Pagliarulo is back with Spartans along with Ciara Barnes, although the defender will remain with Glasgow as youth coach.

Meanwhile, striker Cheryl Gallagher, who arrived from Rangers a year ago, has moved to Switzerland with her work, and Ireland striker Ruesha Littlejohn also looks likely to leave.

Club manager Laura Montgomery insists the upheaval is all part of Black's strategy after seven straight Scottish titles and last term's progress to the last 16 of the Champions League.

"We carried a very large squad last year with 23 players, by far our biggest ever, and this was something Eddie wanted to trim down for this year, which he has done," she told BBC Scotland.

"We were also looking to make some changes to personnel with a focus on youth, energy and pace, which we have got in abundance with the signing of Fiona Brown, Alyshia Walker and promoting Megan Mason from our under-17s," explained Montgomery.

"In bringing in Ella Stephan, who has played with some of the most famous names in world football, we have a defender of real quality and to have now added Julie Nelson again is a real boost as Julie was excellent for us last season."

Montgomery also said that defender Courtney Whyte and goalkeeper Laura Hamilton, both Scotland Under-17 internationals, would supplement the first-team squad as well as playing for their development team.

"Both are very talented players and we are delighted to have them join us at a crucial stage of their development," she said.

"Both are away with the first team to Potsdam for the 'Meet the Champions' tournament and will gain invaluable experience from getting a taste of a competition that features some of Europe's most accomplished teams and players.

"Similar to last season, we will review our position mid-season and, if the right player becomes available to boost our Champions League campaign, we will make a decision at that point in time."

Black explained that Robertson's return to Hibs was partly for logistical reasons.

"It was not a decision taken lightly," he said. "Managing her hectic lifestyle made it very difficult for her and I have to say she is better placed being at a club nearer home and we wish Lisa and all of our other former players the best of good luck for the future."

Black was pleased to retain Nelson, especially as it had seemed likely that player who arrived from Everton last summer would also be leaving City.

"It shows how quickly things can change," he said. "I spoke with Julie at the end of the season and it was agreed she would go home and review her options.

"I had resigned myself to her departure and looked for another centre half to join us as a replacement.

"However, she has had a change of mind and has agreed to stay for the forthcoming season.

"I am happy that my search for a second centre-half is concluded and we now look well covered again in that area."