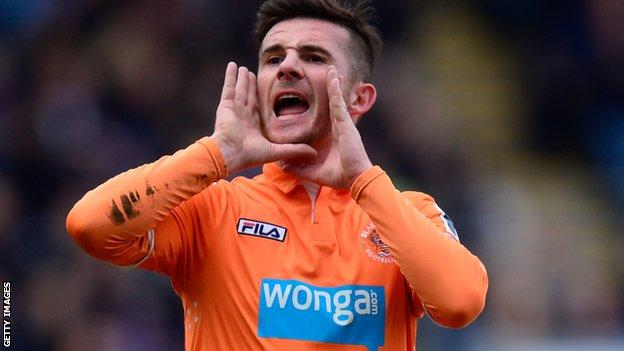 Blackpool caretaker manager Barry Ferguson says the club can still finish in the top six in the Championship.

The Seasiders sacked Paul Ince on Tuesday after a run of 10 games without a win, that has dropped them to 14th in the table.

Asked by BBC Lancashire what the aim was with 20 games remaining, Ferguson replied: "To get into the play-offs.

"That should be the aim. I have seen the reaction the players have given me in training, they are serious."

Blackpool were briefly top after winning five of their opening six games, but have not done so since 30 November.

I am excited and nervous as well. It is the first opportunity I have ever had to do this

However, former Scotland midfielder Ferguson believes the team has the quality to finish the season strongly, starting with Saturday's game against Doncaster.

"There are 20 hard games to go, but I have to be positive. I have a good squad here, you saw the start we had, but I know without doubt, we can get into the play-offs."

Ferguson's playing career has also taken him to Glasgow Rangers, Blackburn and Birmingham City, but he is now relishing the chance to establish his management credentials.

"I am excited and nervous as well. It is the first opportunity I have ever had to do this.

"I have been doing my coaching badges for the last three or four years and something I am looking to get into when I finish playing," he added.

"Whether that happens now or a couple of years down the line, I don't know. I am just going to enjoy the next three days and hopefully come 5pm on Saturday, I will have three points."