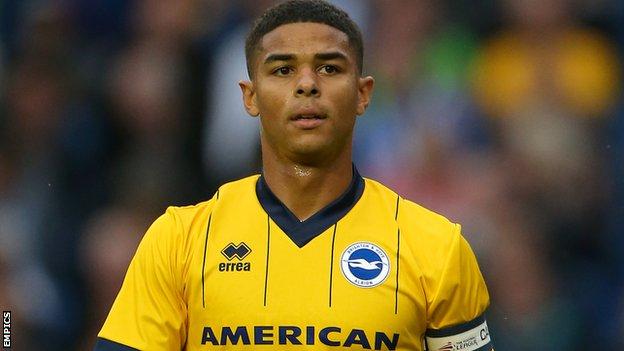 Bridcutt, 24, had a transfer request turned down after reported interest from Sunderland manager Gus Poyet.

"I can understand it but it hasn't been nice for anybody; the club, Liam and the way it has been dealt with," Andrews told BBC Sussex.

"There are issues with a former manager trying to get him. It's been a little bit unsavoury, I suppose."

"It is one of those things you get in football now. We'll know by next Friday night what is going to happen.

It sounds a little bit ruthless but it's Liam's issue. The next game is the priority, always has been and always will be in football

Bridcutt, who spoke last month of his aspirations to play in the Premier League, was signed by Poyet during his spell in charge of Brighton, but newspaper reports say Sunderland's interest in him is matched by Swansea, Fulham and Norwich.

The former Chelsea trainee has made over 130 league appearances for the Seagulls since joining the Sussex club in August 2010 and has won the club's player of the season award in each of the last two years.

However, he asked not to be considered for Albion's trip to Derby County last Saturday after telling assistant coach Nathan Jones he would not be focused to play.

Albion midfielder Andrea Orlandi told BBC Sussex after the match that Bridcutt's attitude had been "spot on" in training but his situation was one the club "needs to sort out as soon as possible".

Republic of Ireland international Andrews, who has played in the Premier League for Blackburn and West Brom, says Brighton's players must try to put Bridcutt's situation to the back of their minds.

"It sounds a little bit ruthless, but it's Liam's issue," he said. "The next game is the priority, always has been and always will be in football.

"It is one of those things that is part and parcel of football these days. You just have to get on with it really."