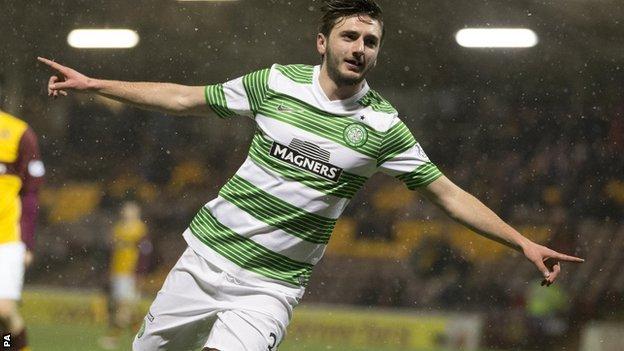 Shrewsbury Town have made their second loan signing in 24 hours by bringing in young Celtic striker Bahrudin Atajic until the end of the season.

The 20-year-old Swedish-born Bosnia-Hercegovina Under-21 international has made four appearances for Celtic.

He scored in the most recent of them in December, coming off the bench to net in a 5-0 win at Motherwell.

Atajic is in line to make his debut in Saturday's trip to Swindon, alongside on-loan midfielder Fraser Fyvie.

I owe Graham Turner a lot. It was very sad to see him go. I've learned a lot from him

Scotland Under-21 international Fyvie, also 20, was brought in from Wigan Athletic on Thursday by Shrewsbury caretaker manager Michael Jackson.

Following the resignation of Graham Turner on Tuesday, Jackson has been put in charge for the next three matches - and he has it in his own hands to make a case for being given the post full-time while chairman Roland Wycherley sifts through the many applications.

"I'd rather this had come in other circumstances," Jackson told BBC Radio Shropshire.

"You never want to see people lose their jobs.

"But I've done a lot of preparation, while I've been taking my coaching badges over the last three and a half years.

"And I owe Graham Turner a lot. It was very sad to see him go. I've learned a lot from him. He's a very good man, a gentleman. The encouragement he's given me over being given the caretaker job, coming from a man like him, means a lot."

Jackson takes over at a time when Town have lost their last three matches.

But he adds: "What I've learned from the gaffer is not to dwell on things.

"We've got in a bit of a rut. We've just got to change the mindset and concentrate on trying to win matches again."

While Atajic will hope to strengthen an attack who have scored just once in their last six home games, Fyvie's arrival is a deal that had originally been set up by Turner.

"It was something we discussed before the gaffer left," said Jackson. "We were obviously looking to bring players in and I still wanted to go ahead with it.

"I had seen him playing against our reserves here and he's got good pedigree. He'll fit in nicely."