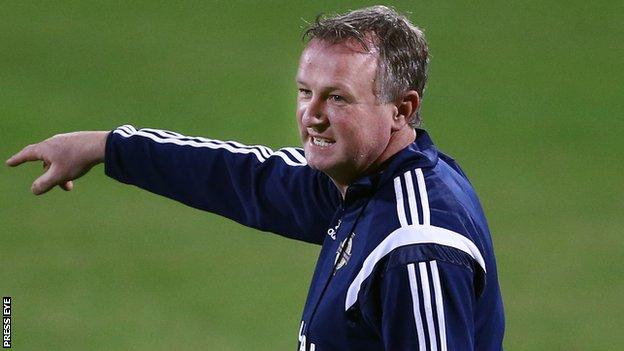 Northern Ireland's task of trying to qualify for the Euro 2016 finals has been made more difficult as they have dropped down to pot five for the draw.

Michael O'Neill's side were in pot four for the last World Cup qualifying draw.

The next European championships in France will involve 24 teams rather than 16 and the qualifying draw will be made in Nice on 23 February.

Meanwhile Northern Ireland will face Cyprus in a friendly international in Nicosia on 5 March.

Michael O'Neill has yet to manage the Northern Irish to victory in a friendly game since being appointed to the job in January 2012.

However, the match at the GSP Stadium will offer O'Neill's 90th-ranked team a good chance to end that statistic against the 125th-rated Cypriots.

The countries have not met since the 0-0 friendly draw at Windsor Park in August 2002.

There was better news for Republic of Ireland manager Martin O'Neill as his side have retained their place in the second pot for next month's Euro draw.

There will be eight groups of six teams and a ninth group of five teams with 23 sides to join hosts France in the final tournament.

The seedings, decided by UEFA's coefficient system which is different to FIFA's world ranking, will see England among the top seeds and Scotland and Wales in the pot of the fourth seeds.