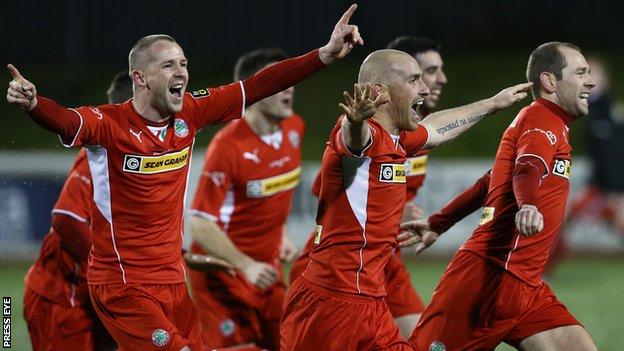 Cliftonville defeated Crusaders in the League Cup final for the second straight year by clinching victory in a penalty shoot-out at Solitude.

A disappointing decider ended scoreless although both sides had chances to win the game in 120 minutes of football.

The hosts made the better start in a frenetic and feisty opening 10 minutes, which saw two bookings for late tackles.

Crues keeper Sean O'Neill blocked Marc Smyth's early shot before a Ronan Scannell cross curled just wide after drifting in on the wind, which favoured the Reds in the first half.

Boyce squandered the best chance of the half on 28 minutes, the forward heading wide at the near-post from McMullan's cross.

Crues defender Paul Leeman was lucky to escape with just a yellow card after a two-footed tackle on Boyce.

The visitors finally threatened 10 minutes from the break when Heatley's volley forced Devlin into a good save, and Colin Coates headed over from the resulting corner.

Crusaders pressed on the restart and Devlin punched a wind-assisted free-kick clear from under the bar before tipping Declan Caddell's volley round the post.

Gormley went down in the box but his penalty appeal was turned down and the ball fell to Boyce, who flashed across goal and wide.

Morrow drilled over from 30 yards before Devlin rushed out to block Caddell's header as the Crues looked the more likely to make the breakthrough.

The tackles were flying in and Crusaders defender Josh Robinson became the sixth player to pick up a yellow card after 80 minutes.

Martin Donnelly almost won it for the Reds in injury time, the winger's deft chip beating O'Neill but landing on the roof of the net.

Owens fired over at the backpost in the first period of extra-time before O'Neill produced two excellent saves, denying McMullan and Boyce.

Owens hooked just over before heading wide while Cliftonville lost the influential Boyce to injury before the game went to a shoot-out.

Devlin kept out penalties from Coates and Owens while Gormley, Diarmuid O'Carroll and Ciaran Caldwell converted their spot-kicks to put the Reds 3-2 ahead.

McClean needed to find the net to keep the Crues in the contest but the defender sliced wide to spark Cliftonville celebrations.