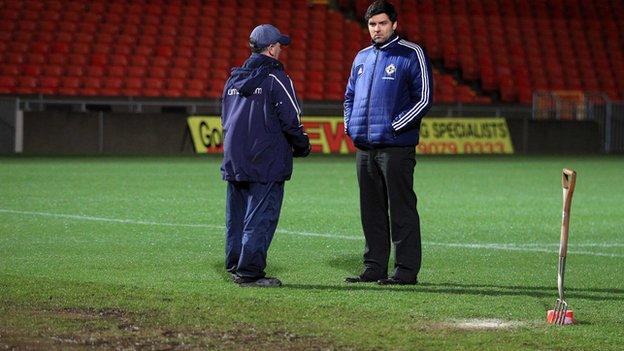 Two of Friday night's Irish Premiership matches have been postponed because of waterlogged pitches.

Coleraine's game against Ballinamallard and the match between Warrenpoint Town and Glenavon were called off after mid-afternoon pitch inspections.

Windsor Park passed a mid-afternoon inspection and league leaders Linfield's match against Ards is going ahead as planned.

Portadown say their match against Dungannon is definitely on.

Warrenpoint's postponement means they now have to find new dates for both of their home games against Glenavon.

In December, the match between the sides was abandoned because of faulty lights with Warrenpoint leading 1-0 at half-time.

It was the club's first match back at their Milltown headquarters after the ground had been upgraded for Premiership football.