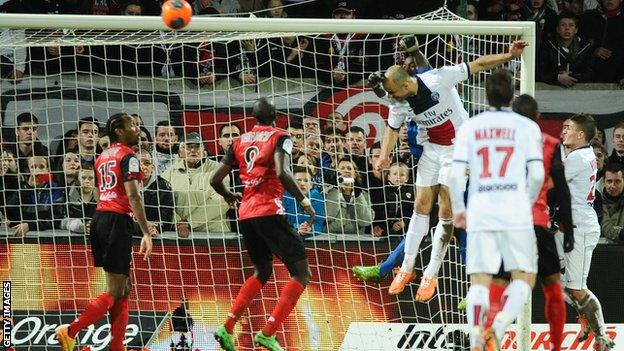 The hosts looked on course for a first win in seven league games when Mustapha Yatabare headed in with just six minutes remaining.

However, Brazil defender Alex nodded in from a corner for PSG soon after.

Laurent Blanc's side extend their lead at the top to six points, but Monaco can cut the gap to three with a win against Marseille on Sunday.

PSG were lacklustre throughout, with both Zlatan Ibrahimovic and Edinson Cavani unable to assert themselves on the game.

Ibrahimovic's best effort was a 40-yard strike that was pushed around the post by goalkeeper Guy Roland Ndy Assembe towards the end of the first half.

Guingamp had only scored three goals since November before the game but looked dangerous at times against PSG.

Youngster Rachid Alioui volleyed just wide, before his long-range free-kick was turned onto the crossbar by PSG goalkeeper Salvatore Sirigu.

Cavani had an effort ruled out for offside at the start of the second half, but chances were few after that and the game was seemingly heading towards a goalless draw.

However, as full time approached, Guingamp took a surprise lead when striker Yatabare got ahead of Marquinhos to head in, sparking wild celebrations among the home crowd.

Those celebrations were short lived as Alex nodded in minutes later to earn PSG a point.

PSG boss Laurent Blanc: "It is always difficult to win games. We came here to win even if we had a lot of respect for Guingamp.

"It is disappointing but I am still satisfied that we never gave up and came back to get a deserved point.

"We were not as good today. Why? I don't want to hide behind it but the state of the pitch was deplorable. It is the case for both sides but it handicaps the team that plays the most football."