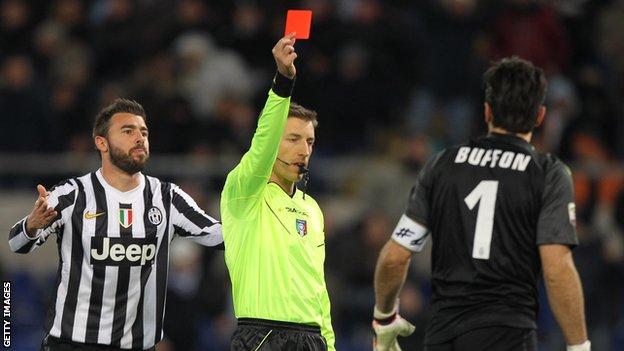 Goalkeeper Gianluigi Buffon was sent off for Juventus as the reigning Serie A champions drew at Lazio.

Buffon was sent off midway through the first half when he brought down Miroslav Klose.

Despite being a man down, Juventus fought back to earn a point when Fernando Llorente glanced in a second-half header.

It is the first time Juventus have dropped points in the league since 20 October, having won their previous 12 games.

They are top of Serie A with 56 points, nine ahead of second-place Roma.

After a run of six games without victory, Lazio's form has improved in in recent weeks and went into this fixture on the back of three wins from their last five games.

There was little between the two sides in the opening stages as Juventus midfielder Arturo Vidal sent a speculative 40-yard effort just over the bar.

Llorente was denied by Lazio keeper Etrit Berisha after a neat turn and shot and the equaliser arrived on the hour mark.

Stephan Lichtsteiner's cross found Llorente and the Spain striker sent his glancing header beyond Berisha to make it 1-1.

Lazio pressed for a winner and Juventus were grateful to Storari as he pushed Klose's point-blank header on to the crossbar.