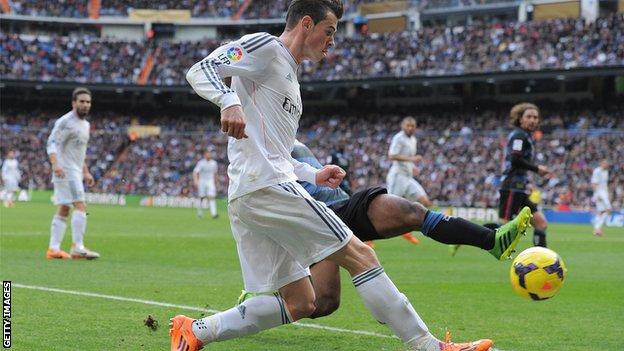 Gareth Bale had to be substituted at half-time with an injury as Cristiano Ronaldo scored to help send Real Madrid clear at the top of La Liga with victory over Granada.

Despite that blow, Real took the lead just before the hour when Ronaldo rifled in his 31st of the season.

Karim Benzema then sealed the win, slotting in from Marcelo's cross.

Real top the standings with 53 points, two ahead of Barcelona and Atletico Madrid, who play Malaga and Rayo Vallecano respectively on Sunday.

The two sides could move ahead of Real with victories, but the form of Carlo Ancelotti's side will undoubtedly be concerning for them.

Real have not lost in the league since the end of October and have now won 10 times in their last 11 games.

The home fans' buoyant pre-match mood was heightened as Ronaldo paraded the Ballon d'Or he won earlier this month.

Real's intensity was high from the outset as Ronaldo shot just wide inside the opening 10 minutes, before a Dani Carvajal cross was diverted onto his own crossbar by visiting midfielder Manuel Iturra.

Bale, too, was looking bright but took a heavy knock when he clashed with Murillo. The former Tottenham forward managed to continue until half-time but was replaced by Jese Rodriguez at the interval.

But the home side finally made the breakthrough just before the hour when Modric passed to Ronaldo inside the area and the Portugal star worked some space for himself before hitting a low drive into the far corner.

The woodwork then prevented him adding a second as his free-kick smashed against the bar.

However, Real put the game beyond the visitors late on when a fine, flowing move involving Ronaldo and Marcelo was turned home by Benzema for his fifth goal in his last six games.

"Tonight we will sleep better than we have on other Saturdays, but we have to keep fighting because it is not always easy as the first half today showed.

"After the knock [Gareth Bale] received he didn't feel comfortable. It just disorientated him a little bit and we thought it best to bring him off. He will be fine for the next game."