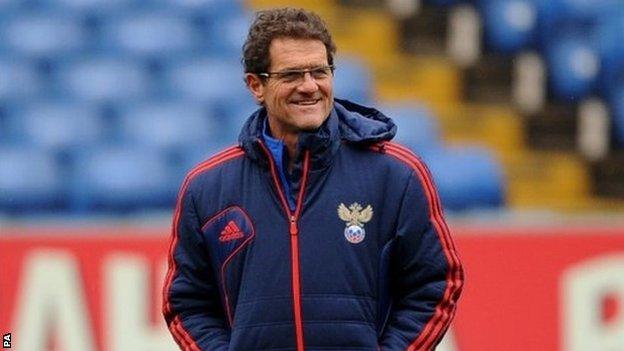 Russia head coach Fabio Capello has signed a new four-year deal to keep him in the role until the 2018 World Cup.

The former England boss, 67, took over in July 2012 from Dick Advocaat, signing a two-year contract, and led them to this summer's World Cup.

They finished above Portugal in European qualifying Group F.

Russia will stage the 2018 World Cup and Capello said: "We have big plans and I will do everything I can to ensure the Russian fans are happy."

The Italian had been linked to Tottenham before Tim Sherwood was named manager in December.

Capello was England manager from December 2007 until his resignation in February 2012, leading them to the knockout stages of the 2010 World Cup.

He guided England to qualification for Euro 2012 but left before the tournament after disagreeing with the Football Association over the decision to take the captaincy from John Terry, who was facing racism allegations.

Before his spell with England, he won nine league titles in Italy and Spain with AC Milan, Real Madrid and Roma. He also won the Champions League with Milan in 1994.

Russia will face Belgium, South Korea and Algeria in Group H in Brazil.