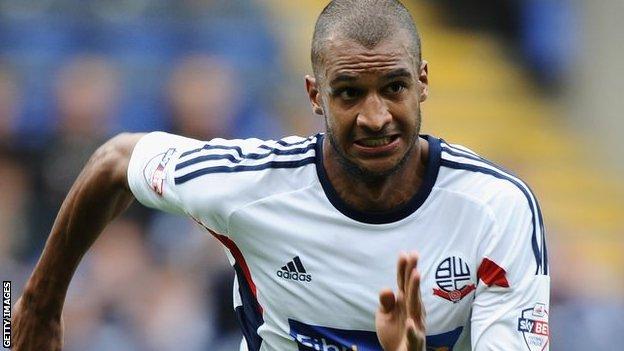 Swansea City will be buying a player of "huge potential" if they can sign David Ngog, according to his former Bolton Wanderers team-mate Sam Ricketts.

Wales defender Ricketts, now with Wolves, played with Ngog for two seasons at the Reebok Stadium.

"He came through at Liverpool, he's got huge potential in the game," Ricketts told the BBC's Sport Wales programme.

Paris St Germain trainee Ngog joined Liverpool for £1.5m in July 2008, scoring 19 goals in 94 appearances fro the Merseysiders before a £4m move to Bolton in August 2011.

"It never quite happened for him goal-wise at Bolton, but in his all-round game he's got everything going for him," added Ricketts, who has won 51 Wales caps.

"He's young, he should really be hungry to prove himself in the Premier League and he's got a chance now to... show everyone he can be a top player.

"He scored goals for Liverpool, he scored for Bolton - perhaps not as many, that would perhaps be his only downfall.

"If he can turn that around then Swansea have got a very good player."

Although the two players' disagreement made the headlines, Ricketts believes that the squad will pull together to move Swansea away from relegation danger.

"Garry has been there for a long time now, he's still club captain and I think he saw a few things which he wasn't particularly happy about," said Ricketts, who was at Swansea for two years.

"One of the things about Garry is the standards he sets himself, he expects everyone else to follow and if that's not quite the case then he'll try and make sure their standards remain high.

"I think it was an altercation that would probably happen at every training ground throughout the country and unfortunately this one just happened to get out.

"But I think it's a good sign when you've got players inside the club striving and wanting to turn their fortunes around."