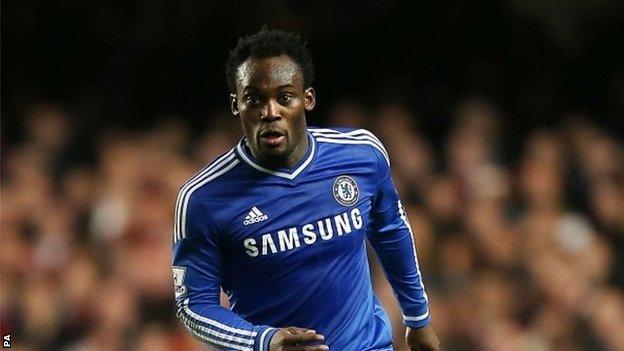 Chelsea midfielder Michael Essien says he has completed a medical ahead of his proposed move to Italian side AC Milan.

The two clubs agreed a deal for the Ghana international, who joined the Premier League side in 2005, on Friday.

Reports in the Italian media suggested he had failed a medical.

However, 31-year-old Essien later tweeted: "Haters will broadcast your failure but whisper your success. Medical's done, looking forward to starting my new life with AC Milan."

Essien, who was Chelsea's record signing when he arrived from Lyon for £24.4m, has made nine appearances this season since returning from a loan spell at Real Madrid.

He has been in Italy for talks with new Rossoneri boss Clarence Seedorf.

"I'm happy to be here. I will do my best for Milan and I hope to be ready to play," he said.

"I spoke with Mr Seedorf two days ago. I cannot wait to be available.

"I really want to thank the chairman and the team and thanks to (Chelsea boss) Jose Mourinho, who has allowed me to wear the Rossoneri shirt."

Essien helped them win the Champions League - although he was an unused substitute in their 2012 final triumph over Bayern Munich - as well as two Premier League titles and four FA Cups.

He made only 10 league starts in 2011-12 following an injury-hit year and moved to Real Madrid on loan last summer.

Following 35 appearances with the Spanish giants under Mourinho, he followed the coach back to Chelsea after his loan spell ended.

However he has struggled for a place in the team this year, starting only two Premier League matches since his return, and the £21m signing of Nemanja Matic has further decreased his chances of playing.

Seedorf was named Milan boss last week after Massimiliano Allegri was sacked with the club 11th in the table.