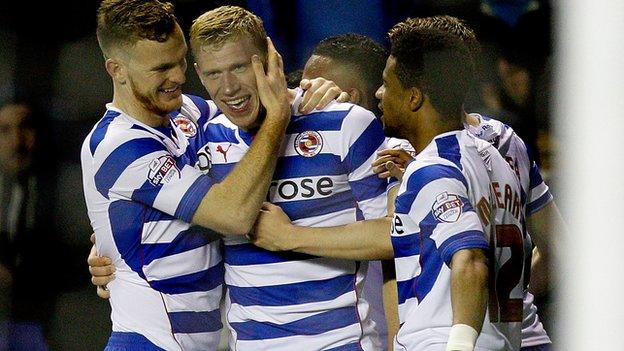 Reading consolidated their place in the Championship play-off positions with a comfortable victory at Millwall.

Pavel Pogrebnyak scored his ninth goal of the season when Stephen Bywater's fumble allowed him to slot home and give Reading a half-time lead.

Liam Feeney missed a one-on-one chance to level after the break, before Alex Pearce thumped Reading's second from a tight angle with 18 minutes left.

Reading have now scored 15 goals in their past four games, while Millwall have lost six of their past nine league matches and are just two points above the relegation zone.

Despite their poor form, Ian Holloway's side had lost just two home games in 11 ahead of kick-off and they started quickly, forcing Reading goalkeeper Alex McCarthy to deny DJ Campbell - making his full debut - early on.

Steve Morison volleyed over for the home side, before Bywater palmed Jordan Obita's low free-kick behind as Reading settled.

But the former West Ham goalkeeper was at fault for the opener, his failure to collect Chris Gunter's delivery allowing Pogrebnyak to apply a left-footed finish.

The ex-Fulham striker, who has three goals in four matches, constantly tormented a Millwall defence which has conceded more goals than any other side in the division.

McCarthy denied Feeney after the restart when Morison slipped the midfielder through and Reading, who have now won four of their past five league games, took full advantage.

Reading lost four of their six Championship matches in December 2013, but have won four, draw one and lost one in the league in January.

Bywater's parry from Pogrebnyak's header fell into the path of defender Pearce, who scored his first goal of the season, before Williams raced through to add the third, as the Royals stayed four points clear of seventh-placed Ipswich.

"That is obviously the feeling we have had here before I came and it is amazing how quickly it came back. I inherited a situation and I have got to make it better.

"I went to try and get back in the game and that is why the score became as bad as it ended.

"We have come here able to select the same team for the fifth game running which helps and it was a great workmanlike performance.

"You can see the togetherness of everybody which is great and it was a good three points at a very difficult place to come to.

"Pavel has been top-drawer. He works very hard in training and just epitomises the way the team is at the moment."