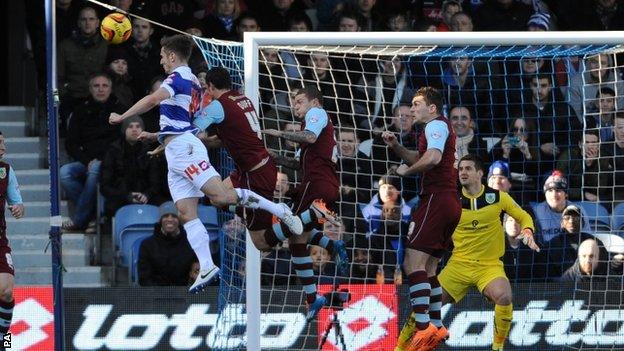 QPR stayed second in the Championship after debut goals from strikers Kevin Doyle and Modibo Maiga helped them draw with third-placed Burnley.

Vokes then tapped Burnley into the lead before Maiga grabbed a point.

The West Ham loanee, one of five deadline-day signings made by QPR, came off the substitutes' bench to tap home Junior Hoilett's cross after poor defending from Ben Mee.

Doyle was the only one of QPR's new recruits to start as Harry Redknapp's side looked to close the gap on leaders Leicester.

The Londoners went into the game with the joint-best home record in the Championship, having won 11 and drawn two of their 14 games at Loftus Road, and got off to a quick start.

Doyle, signed to help compensate for the long-term absence of former Burnley striker Charlie Austin with a shoulder injury, headed the hosts ahead from close range as the Clarets failed to clear a corner.

But Sean Dyche's men have been the Championship's surprise side this season and, defending a run of just one defeat in 10 league games, they quickly hit back through top scorer Ings's 22nd goal of the season.

The former Bournemouth man volleyed Kieran Trippier's cross home from 10 yards, but parity was not restored for long as Dunne's powerful volley, from more poor Burnley defending following a corner, put QPR back in front.

Michael Duff headed wide for the visitors from close range soon after the restart, but Vokes's toe-poked volley from Michael Kightly's cross brought them level again.

Burnley were buoyed and eight minutes later they were ahead after some terrible defending from Benoit Assou-Ekotto was capitalised on by Ings, and his pull-back from the byeline was tapped home by Vokes.

Ings then shot just wide after being sent clear on goal, and his miss proved costly as Maiga earned the hosts a crucial point.

"Harry Redknapp is shrewd when it comes to dealing in the transfer market and he has an amazing instinct for these things.

"He can almost sniff out a player and I hope he's proved right again.

"Maiga for whatever reason wasn't doing himself justice at West Ham, but both Harry and I had seen him play and Harry felt he had a little more to offer than he has shown.

"What you know you will get from Kevin Doyle is a stint, he will chase lost causes and we need that energy. Hopefully that goal will do him the world of good."

"We've now taken four points off the pre-season promotion favourites and that's a good marker for us - we are up there for a reason.

"Ings and Vokes are a very good partnership and very good individually. They have quality and the desire to work hard for the team."