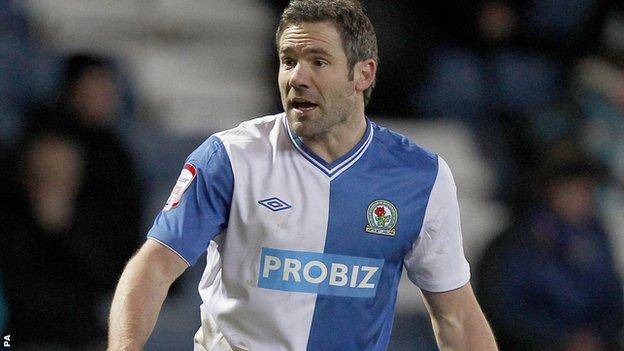 Veteran midfielder Dunn opened the scoring in the first half with a left-foot shot from the edge of the area.

Blackpool's Chris Basham forced home keeper Paul Robinson into a save while Stephen Dobbie also went close after a fine run and shot.

But Hanley sealed victory when he headed home a corner late on.

Seasiders at a low ebb

Blackpool have won only one of their last 16 games in all competitions, a 2-0 league win at home to Sheffield Wednesday in late November

It was Rovers' first win in five matches and keeps them five points behind sixth-placed Reading, who enjoyed a 3-0 victory at Millwall.

Blackpool, who sacked boss Paul Ince in January, could have taken an early lead when an unmarked Isaiah Osbourne headed over the bar, and they were made to pay for that missed chance when Dunn picked up the ball 30 yards out and advanced forward before firing home.

Basham's 30-yard effort caused Robinson a nervous moment while striker Steve Davies found the side-netting for the Seasiders after spinning in the area.

But the hosts had further chances, both Jordan Rhodes and Rudy Gestede trying their luck with headers, and it was no surprise when Rovers doubled their lead.

Moments after Blackpool substitute Dobbie had jinked into the area and seen a left-footed shot deflected over the bar, Hanley headed Craig Conway's corner into the ground and over Matt Gilks to seal all three points.

"It was important that we turned our performances into wins and we're delighted that we've done that.

"I thought it was a very professional job today. Barry Ferguson's got them fighting for their lives and it took a bit of brilliance from David Dunn to unlock them but we felt we should have been more up with the possession we had in the first half, been more clinical but in terms of the performance, very professional."

"I sat down in the dressing room and I said to the players, 'if you look through our squad and you add Ricardo Fuller and Jack Robinson to that, I'd take that squad over anybody's'.

"All they need is a bit of belief and I need to spend a bit of time with them.

"I think it's a quality squad and I think it's good enough without a doubt, and they need to believe in that. I wouldn't be sat here if I wasn't confident that I could do it."